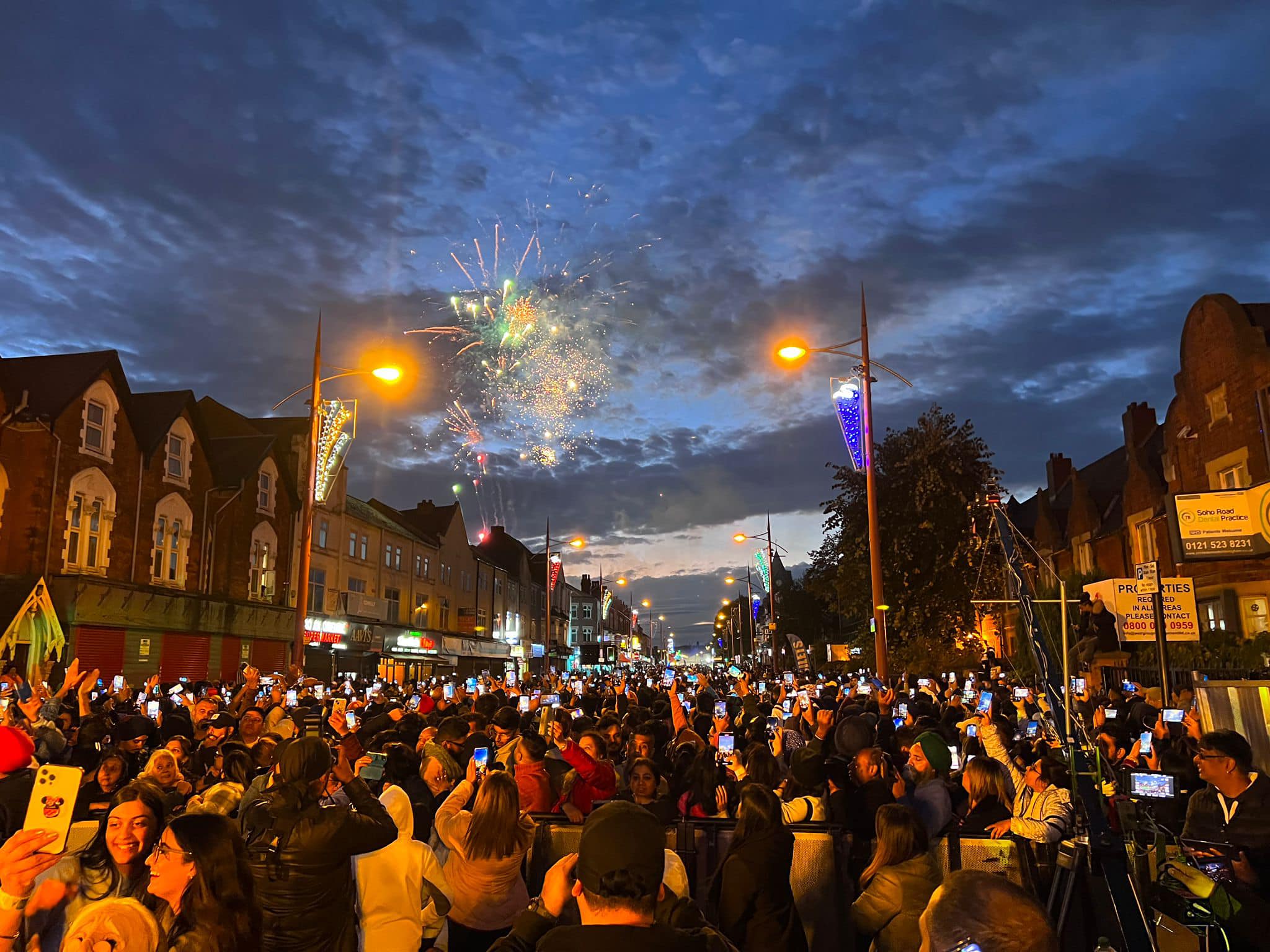 With Diwali just around the corner, yesterday (Sunday 9 October) thousands of people gathered on to Soho Road in Handsworth for the Birmingham Diwali Mela. This was the first time since Covid struck.

Soho Road was closed off as music was played, singers sang, rides for the children, stalls for people to visit, food being served and the gathering of the community.

People say it ‘feels like India’ and wandering down it certainly feels that way.

A display of 2.8 miles of lights for Diwali along Soho Road – said to be the biggest light schemes of its kind in the city. The lights will remain on right through to the new year so people can enjoy them throughout Halloween and Christmas.

The date for Diwali this year falls on October 24 for 2022, so the Mela gave people an exciting start to build up to the Festival of Lights.

“There’s been so much happening today,” said Jagruti Duggal, from Soho Road BID. “It’s a family friendly atmosphere with a fairground and market stalls, a time for families to get together, to celebrate our festival of Diwali.

“It doesn’t matter where you’re from, today is all about celebrating and coming together as one. Birmingham’s Diwali Mela is full of diverse performances and activities for everyone.”

The line-up of acts on stage included the Master of Sufi, Rasp and CVS, Punjabi & Bollywood Music and Master Saleem plus Handsworth born-and-bred music star Apache Indian who also runs an academy on Soho Road. He said: “We’ve been running a music academy free of charge here at the college for the last eight years. It’s not just about music, it’s about mentoring and giving back to the community that’s given me so much. I was brought up on this road right here (Soho Road) and whatever we have here we share with the world, so it’s nice to bring it back home. It’s such a special day today.

“AIM is Apache Indian Music academy, you can come and see me here and we’re on social media. We were recently blessed with a special award from the Queen.

“It’s all about giving back to the kids. Music brings us together and together we try to bring about a change. Young people, singers, rappers, any style, any genre, any language, all come together and work with myself and everyone at the college and in the community. And that’s what Handsworth is about.

“It’s so important for me to be back in Handsworth because everything I have comes from Handsworth. We’ve got 30 years of celebrating that diversity with the world. People ask where do you come from, where do the songs come from? I always tell them Handsworth. So it’s great to be here, performing and sharing with the young people.

“That’s a dream come true to bring it back home, back to the community. I think, if you’re out there and you’ve had success, come back and share it back to the place that gave you that success.”

Gurmit Singh Baghal helps to run the family business C&S Home Stores which was started by his father 47 years ago on Soho Road.

“Diwali Mela is a fantastic event, bringing all the community together,” he said. “It’s multicultural but not everyone realises this. A white lady said to me the other day ‘am I allowed to come?’ She wasn’t aware it was for everyone, she thought it was just for Hindus and Sikhs.

“It’s for everyone and it has a lovely, lovely atmosphere. It’s all about celebrating the beginning of a new year.”

Diwali is the five-day Festival of Lights, celebrated by millions of Hindus, Sikhs and Jains across the world. It celebrates new beginnings and light over darkness symbolising good over evil.

Cllr Raj Mehta, mayor of Telford and Wrekin, started out in business on Soho Road and still comes back to the area every week. He said: “People from all areas come to Soho Road because it’s like India for them. There’s Asian street food, clothes, cutlery.

“Soho Road features in songs. It’s the heart of the country for Asian people and people know about it all over the world. It’s a vibrant place and, within five minutes of talking to people, you can connect. That’s the beauty of Soho Road.”