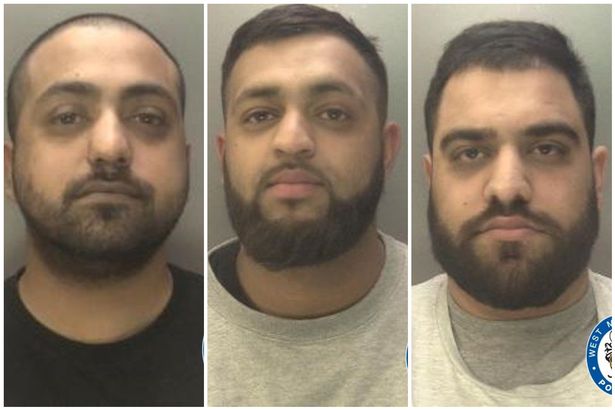 A picture of the three killers who chased after man through the streets of Birmingham and fatally stabbed in a revenge attack has been released by the police.

The trio Mohib Tasharat, Kasim Ifzaal and Ibrahim Raza were among a group of men who pursued and killed Bashir Mohammed in April last year and have been jailed for a combined total of 27-and-half- years.

The victim was chased by cars and on foot through Birmingham, before being stabbed in the arm and bled to death.

Police identified Tasharat, 24, and 26-year-old Ifzaal as being among the attackers. Tasharat, of Wenlock Road, Handsworth, tried to flee the country the following day and was arrested at Birmingham Airport.

Ifzaal of Ombersley Road, Balsall Heath, as detained three days later driving towards Dover port. Raza, 32, was arrested on May 10 at his Oldfield Road home.

Mr Mohamed was involved in a shooting in Fulham Road, Sparkbrook in the early hours before being stabbed.

Police said he ran off and robbed a car at gunpoint in Ladypool Road, in a bid to escape a group of men who emerged from the property. They chased the stolen Audi in a Nissan Note, at times ramming its rear bumper, before both crashed on grassland near Ashton Croft.

Mr Mohamed was cornered in Shyltons Croft by the men – plus others who arrived in more cars – before he was stabbed. Audio from a nearby doorbell camera caught the moment one of the offenders shouted: “I’ve killed him” before all the men made off.

The three were charged with murder, following lengthy deliberations at Birmingham Cron Court.

All three admitted manslaughter. Tasharat, Ifzaal and Raza were jailed for 11, ten and six-and-a-half years respectively during sentencing on April 29.

A fourth man, Nabil Akhtar, was cleared of involvement in the killing. Det Insp Laura Harrison said: “There was clearly some kind of dispute between the two groups, which we believe escalated when a car deliberately rammed into a dessert shop in Ladypool Road last May

“We believe that prompted an arson attack on a house in Fulham Road. The shocking fallout from that saw Mr Mohamed chased and fatally stabbed.

“These men pursued the victim for several minutes in cars and were determined to cause him serious harm.”

A 27-year-old man suspected of petrol bombing the house in Fulham Road before the stabbing is due to stand trial for arson and gun possession at a later date.