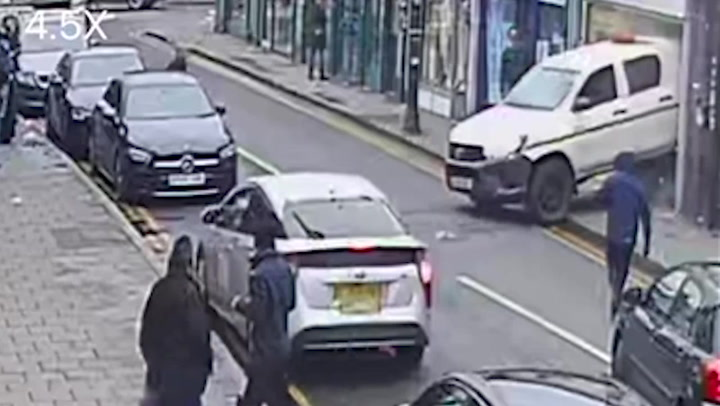 A jewellery shop in one of the busiest roads was ram raided in broad daylight on March 3 around midday.

CCTV shows a gang in a pick- up truck pulling up outside the shop while two other cars blocked off the road in both directions.

The driver of the white van reversed at full speed into the front of Danyaal Jewellers, just as a woman holding a bag walked past.

Masked men, ran inside as smoke poured out of the wrecked building. An accomplice with an axe came into frame and shouted at people to ‘get away.’

Jawad Rana, 51, from Easyway Travel, the shop next to Danyaal Jewllers on Ladypool Road, left his shop within seconds after hearing a loud bang from next door. He was confronted by a scene of carnage as a large truck was repeatedly reversed into the business next door.

Jawad told BirminghamLive: “It happened around midday when I heard a loud bang from next door so I rushed outside. There were about three to four men with balaclavas on their face.

“I just threw the rubbish bag near me at the car when it was escaping. The men had stopped the traffic from both sides so no cars could get across.”

“We were called to the store at around 12.20pm. Fortunately, no one was in the store at the time, so there have been no injuries reported to us.

“Significant damage was caused to the shop in the ram raid. Three vehicles believed to have been involved have since been recovered, and we are working with the shop owner to establish exactly what was taken

“Our investigations are in the early stages and we are working to identify the people responsible. We are urging anyone with dash cam footage, CCTV or mobile footage to contact us.”

Anyone with information should contact police by calling 101, quoting crime reference number 20/172104/22. Alternatively, information can be given anonymously by calling Crimestoppers on 0800 555 111.