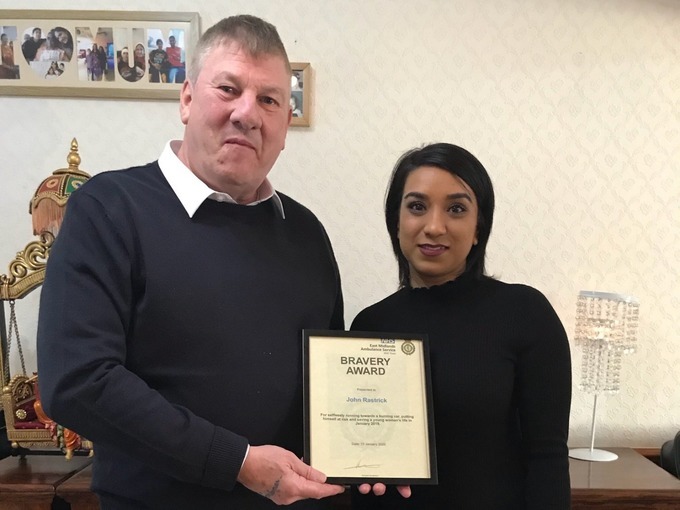 A lorry driver who rescued a woman trapped in her burning car on the M1 which exploded seconds later, has been given a bravery award for his heroic actions.

John Rastrick from Chesterfield risked his own life to save Pari Mistry from her burning car on the motorway in January 2019.

Ms Mistry’s car lit up in flames last year after a fatal collision.

The lorry driver’s own dashcam footage recorded the moments where he and others dragged Pari out of her car to safety, moments before it exploded.

Ms Mistry, who had been on the way to meet her husband for dinner, spent four days in a critical care unit at Coventry and Warwickshire General Hospital with a skull fracture.

She then underwent an eight-hour operation on her skull and then had to learn to walk and talk again.

John and Pari have been reunited with paramedics and technicians from the two ambulances that attended the incident, who have presented John with a surprise bravery award from the Midlands Ambulance Services on Wednesday 15 January.

Mr Rastrick said: “I saw her car spin two or three times when another car collided with her and her vehicle immediately set on fire.

“So I’m thinking I’ve got to get out, I’ve got to sort this out. Because I know I’ve literally got seconds, it’s going to go up and whoever’s inside is going to be dead.

Ms Mistry said: “I don’t remember much from the incident, apart from what I have been told but I know I immediately thought I was going to die.

“For my family, this incident was especially hard as we are all really close.

“With their support and help, I was able to persevere with my recovery and say thank you to John in my own words”