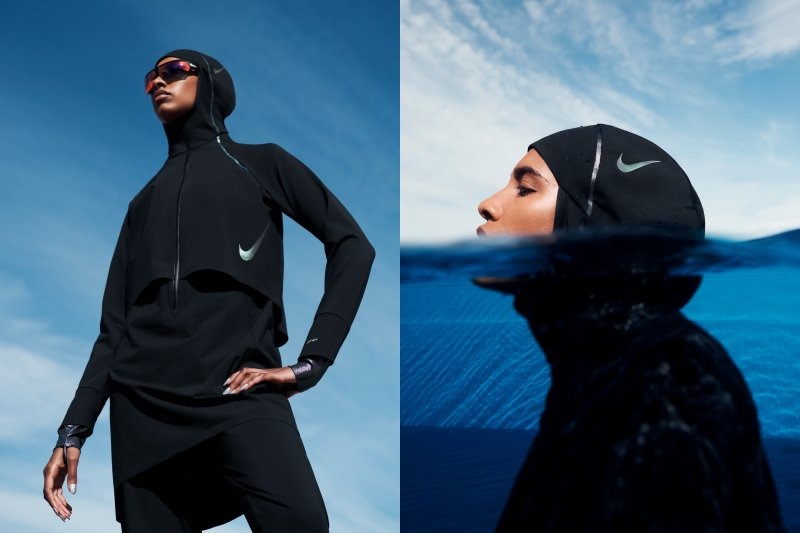 Sportswear Nike has launched its first ever swim collection for athletes who wear a hijab.

The Nike Victory Swim range of leggings, tunics and a hijab and the items will be released in stores in the UK, US and Middle East in February.

Prices start from just £32 for the Nike Swim Hijab but professional athletes will have to fork out £500 for the Performance Nike Victory Tunic Top and Leggings set.

The new line follows the success of the Nike Pro Hijab, which was worn by US champion fencer Ibtihaj Muhammad when she took the bronze medal at Rio in 2016

The sports giant now hopes to bring the same technology to swimwear in order to encourage more women to take up swimming.

A spokesperson for the brand explained: ‘As designers continued learning from athletes across diverse communities, they saw a striking gap in apparel for water sports — specifically, a lack of options for female athletes who don’t want to choose between modesty and movement with comfort and confidence.

‘Existing products were lacking in either coverage or functionality, athletes shared, leaving them feeling weighted down by baggy garments, battling drag instead of striving toward personal bests or worrying about whether their hijabs and coverings would remain in place.’

The Swim Hijab features an integrated mesh pocket that holds hair in place throughout underwater movement.

A figure skater Zahra Lari,from UAE is the first in her sport to try out the swimwear.

Speaking after trying the products, she said: ‘I feel super light and confident in this. It doesn’t weigh you down, and it helped me swim better. It’s so different than any of the swimsuits I’ve ever seen, and I know I can wear this confidently.’