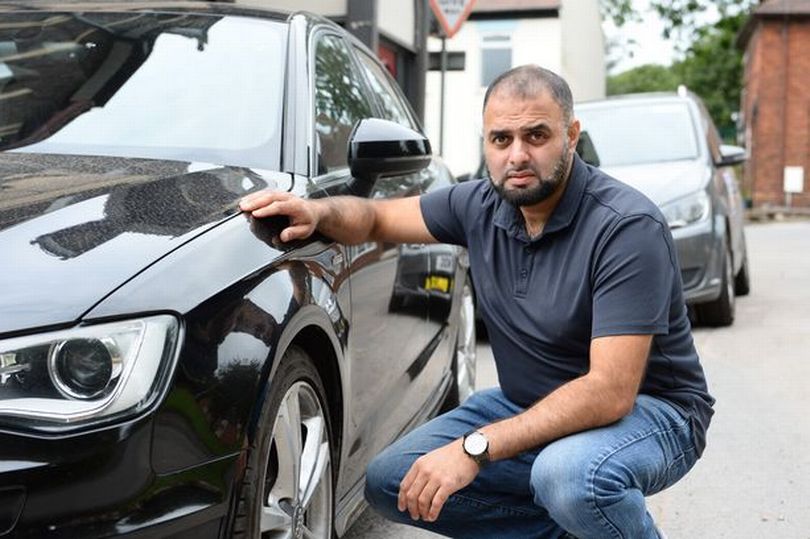 A Midlands taxi driver is furious as he is left out of pocket by hundreds of pounds after hitting a road defect.

Ahmmar Mahmud, 41, was left with the repair bill of £500 alongside another driver who hit the same pothole.

Mr Mahmud had to replace an alloy wheel and tyre for his Audi which were damaged by the road defect – two weeks after he reported it to Stoke-on-Trent City Council.

He is now lodging a compensation claim with the council.

Mr Mahmud said “I reported the pothole because you can see the steel underneath – it’s not safe. I then hit it and it cost me £500 to fix the damage.

“The pothole should have been fixed. The car needed a new tyre and it damaged the alloy.”

Businessman Mohammed Safir says he has also fallen victim to the potholes on the corner of Plex Street and Nash Peake Street, in Tunstall. He was left with a big crack in his tyre and a repair bill of up to £800.

The 41-year-old car wash owner said: “I drove over the pothole and my tyre had a big crack in it. I thought it was just a puncture but the garage said the wheel was broken and needed to be replaced.”

Ahmmar says the carriageway is affected by lorries going to and from recycling firm SJ Walchester, on Nash Peake Street. He says his taxi is constantly covered in dust.

He added: “The lorries are always going up and down and they’re causing loads of dust. The dust is making me ill. I’ve got eczema and my kids have got it really bad.”

SJ Walchester operations manager Kirsty Walchester said: “We have had a fully-functioning mobile wheel-wash on the site for some time now and we operate our own road-sweeper to ensure that should any debris be noticed on the roads we are able to act immediately.”

A Stoke-on-Trent City Council spokesman said: “Any claim made against the city council will be investigated and managed by the insurers.”