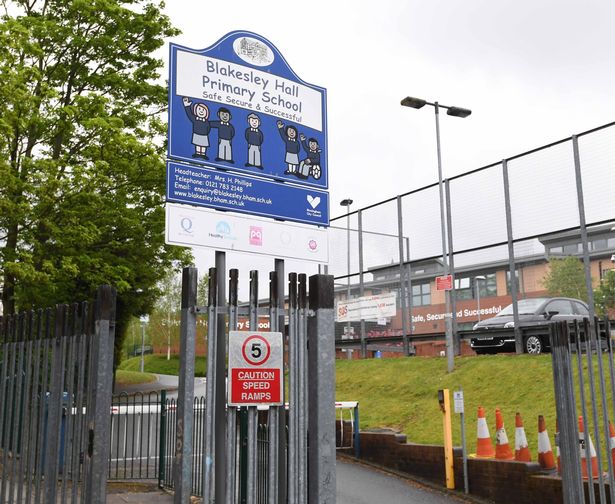 Parents whose children attend Blakesley Hall Primary School are fuming after the school has axed its after school club.

The school claims budget cuts mean it can’t afford to keep the club going  even though parents are paying £55 a week for the service.

Working mums and dads are outraged and have launched a campaign to save it.

The club operates five days a week from 7.30am to 5.30pm, with pupils going before and after lessons.

Parents received a letter of the closure from the headteacher and claimed they had no consultation.

Currently, 28 parents send their children to the club.

The letter from the head said its last day would be the end of term, July 19, and it would no longer operate from September.

One of the families affected is Halimah Lloyd-Davies and her maths teacher husband Habeel Nawaz, 35, who send their five-year-old daughter Jennah Nawaz to the club.

Halimah, aged 36, said: “Myself and many other working parents rely on this club.

“They should be supporting parents who work – not making it difficult for us.”

Halimah, a customer collaboration manager for Nivea, said Blakesley Hall had already dropped to a four-and-a-half day week, closing early on a Friday due to lack of money.

She said the school’s argument that it couldn’t afford to keep the club running didn’t make sense.

“The school haven’t told us exactly how much income the club generates, but we’ve calculated it ourselves as that, with some parents paying full-time, others part-time.

“Its only expenses are the wages of two part-time staff members and refreshments – just a couple of sandwiches.

“If they’d have come to us and said: ‘This is the situation, would you mind if we put up the fees’, we’d have said yes,” Halimah said.

“We’d have been prepared to pay extra to keep it afloat.

“Or why can’t they outsource it to an outside childcare provider?”

She said the school had suggested parents sent their children to other after-school groups in the area – but that was a non-starter.

“How would the children get there? Who would take them and in what vehicle?” she said.

“If they’d come to us before making this decision we could have worked with them to resolve it.

“We love that club and that’s the reason why I chose the school, because of the club.”

The parents have asked Yardley MP Jess Phillips to help and have lodged a formal complaint against headteacher Heather Phillips.

The letter from Ms Phillips says: “It’s with regret that I write to inform you that school will no longer have before and after-school provision and that Busy Bees Club will cease to operate after Friday July 19th.

“This was a difficult decision for me to make as I appreciate the importance of out of hours care for you as working parents.

“The constraints of school funding means I am unable to continue this provision.

“Currently the budget for teaching and learning is being stretched to cover Busy Bees, and even when there is full subscription, unfortunately the fees do not cover the expenditure.

“The decision was made having reviewed the budget for the coming academic year (the week before the Easter holiday) giving you as much notice as possible to make alternative arrangements for September.

“I have asked my PA to investigate local childcare providers.

“In the next week or two I will provide a list of those locally recommended by other parents and other local schools.

“I appreciate this will be inconvenient for you, please contact me if you feel I can help in any way.”