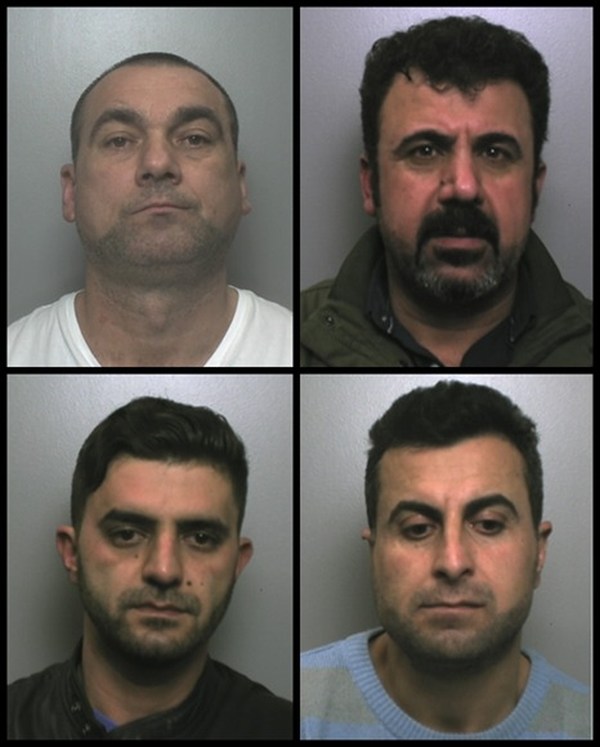 Four men have been jailed after being caught at a service station on the M6 after smuggling two illegal immigrants into the country.

Hiwu Ali, 40, Ismael Akdaci, 38, Constantin Morariu, 42, and Ioan-Sorin Moldovan, 29, all pleaded guilty to conspiracy to assist illegal entry into the country after two illegal immigrants travelled to the UK hidden in the cab of a lorry.

The pair took a selfie as they arrived in Portsmouth hidden in the cab of the lorry being driven by Morariu on February 12 this year, Stafford Crown Court heard on Monday.

Morariu  then drove to Hilton Park Services on the M6 between Junction 10a and Junction 11 in Essington where he met Akdaci, Ali and Moldovan.

The four men were then arrested by police who also found a large sum of money which was with the individuals.

Mr Paul Mitchell, prosecuting, said: “The case relates to a plot to arrange entry to the UK of two illegal immigrants, two men who had no right to be in the country.

“They were brought here on February 13 in a lorry being driven by Morariu.”

The day before Morariu was arrested he was in the northern France driving towards Lower Normandy, Mr Mitchell said.

When he arrived he called Moldovan, then about an hour later Akdaci called one of the two illegal immigrants.

Morariu boarded a ferry from Caen just before 7am on February 12, but took an “unexplained diversion” in the area beforehand, according to the prosecution.

“Given the presence of the immigrants in his lorry, the crown says there is reasonable inference that they boarded the lorry during this unexplained stop,” Mr Mitchell added.

At 2.17pm the two illegal immigrants took a selfie in the lorry cab, and by about 6pm the lorry, along with cars containing the other three defendants, were heading north on the M5.

The four met at around 7.30pm at the services and Morariu shook hands with Akdaci and the two immigrants got into the back of his car, before officers arrested them.

Mr Mitchell said that Akdaci commissioned the bringing into the country of the two illegal immigrants, Moldovan was a go-between and Ali was a driver assisting for the pick-up of the two men.

“The money found gives a strong inference this was a commercial operation,” he added.

Mr Paul Kay, for Akdaci, said he pleaded guilty at the first opportunity.

He added: “He has no previous convictions, and has worked as a manager of a small convenience store.”

“He has expressed his desire to return to Romania where he was young children.”

Mr Anis Ali, for Morariu, said: “He is appearing before the court for the first time.

“He is a married man with two children and is the primary bread winner.”

And Mr Paul Cliff, on behalf of Ali said his role was “relatively limited”.

“Akdaci has been a friend of his for a number of years, but the other defendants are not known to him,” he said.

National Crime Agency operations manager, Kay Mellor, said: “This crime group had no regard to the safety and wellbeing of the migrants. They treated them as nothing more than a commodity to make money from, preying on their vulnerability and desperation to enter the UK.

“Making profit is the motive for criminals and in this case we made sure crime didn’t pay; seizing their cash and shutting down their operation.”