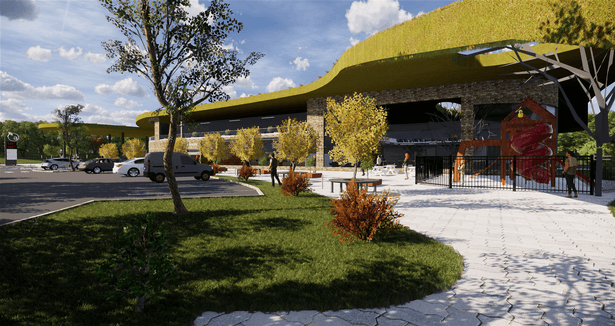 Some fresh images depicting what a new motorway services in Solihull could look like have been released. As more than 1,000 residents in the neighbouring area object to the new development.

Applegreen Plc has announced more than a dozen artist’s concepts for a proposed development at Junction 4 of the M42.

The scheme, which the developer says would create 300 new jobs.

Applegreen’s scheme, a stone’s throw from Shirley and Monkspath, is the smaller of the two, although it would still take in around 12 hectares of Solihull’s green belt.

In a statement on a specially-created website, Eugene Moore, the firm’s chief development director, said: “We hope that Solihull will make the right choice.”

“Our layout and design is sculpted to fit into the low-lying land nearest the M42, with local wildlife habitats and public paths protected and enhanced, to generate a more sustainable use of land currently designated unsuitable for intensive farming.”

While the applicant has insisted that the site is designed to blend into the local landscape – the building will have “a green roof” – and that road changes will improve traffic flow, there is nonetheless significant public opposition.

Critics maintain that there isn’t a need for the facilities at this location and are worried about increased congestion. The council decision session will take place on Wednesday 27th March.