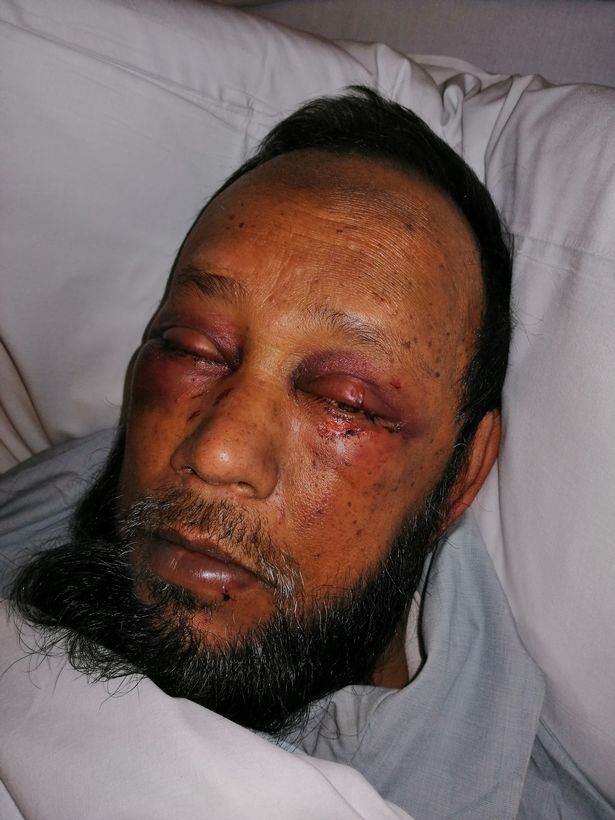 A hard working taxi driver was viciously attacked by alleged drunken yobs outside the National Motorcycle Museum suffering facial. injuries and bruising around both eyes

Mohammed Rahman, 56, from Sparkbrook was knocked unconscious after being repeatedly punched and strangled from behind by thugs.

Mr Rahman was called to pick up two guests from a party while working an evening shift for Solihull-based A2B Radio Cars.

He recalls telling one guest to take his feet off  the back seats before waking up at Heartlands Hospital on Sunday evening, February 24.

The dad-of-two claims he was ambushed after refusing to take the guests to Leamington Spa after one of them lay down horizontally across the back seats in his cab.

After ordering both to get out, his attackers lashed out and hit him so hard Mr Rahman was knocked out and collapsed onto his steering wheel.

Mr Rahman has suffered blurred vison from the brutal attack and could face losing his job.

Still too concuss to speak from his bedside at Heartlands, mortified brother Ahmed Reza told BirminghamLive: “I went to visit him on Wednesday and he was in tears with his family because he has been informed that he may lose his sight partially as a result of this incident.

“He will have to give up his driving and taxi licence, a job he loves.

“He could lose his livelihood, his only income. It’s made us all feel very sad and angry.

“Why should my brother tolerate this? He was just doing his job.

“You just don’t expect taxi drivers to be attacked. He didn’t do anything wrong, just refused a fare because he was abused.

“He’s getting better now but is still set to have a MRI scan on his brain to check for any bleeding or a tumour.

“Mohammed is still suffering with 20/20 vision, it doesn’t look good.”

Of the harrowing attack, Mr Reza said: “It happened at the National Motorcycle Museum car park.

“When my brother arrived, two drunken passengers – both Asian – got inside the cab.

“One sat at the back with his legs across the back passenger’s seats.

“A request was made to the back-seat passenger to sit properly and he refused and became very abusive.

The victim’s brother has now issued a direct message to those who strangled and smacked his brother.

“I hope that the perpetrators of the crime will feel some remorse after seeing and reading the article,” he said, “which will highlight the seriousness and the effect of their unprovoked attack on a family man who was simply doing his job. This was a horrific crime.”

A spokesman said: “Police are investigating an assault on a taxi driver outside the National Motorcycle Museum, Coventry Road, Solihull, around 9.30pm on Sunday, 24 February.

“A man was taken to hospital with facial injuries following a dispute with a passenger.”

*Anyone with information is asked to contact West Midlands Police via Live Chat at  west-midlands.police.uk  between 8am and midnight, call 101 anytime or contact Crimestoppers anonymously on 0800 555 111. Quote crime reference number 20SH/47259A/19.