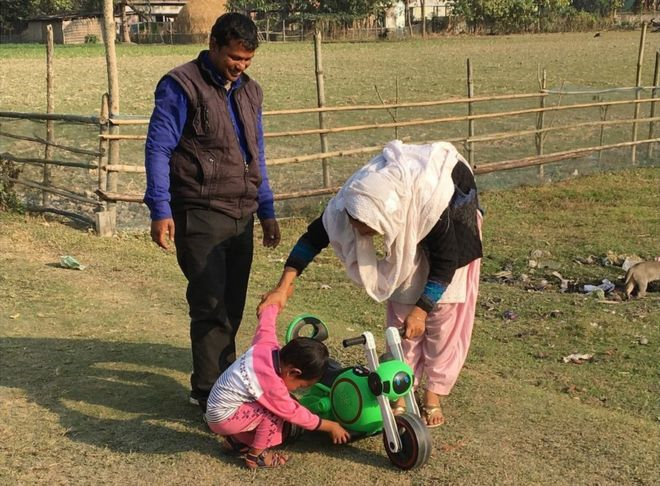 In the north-eastern Indian state of Assam in 2015 two babies born within minutes of each other and from very different backgrounds were accidently switched at birth in the hospital.

After a battle with the authorities, the DNA tests came through two years and nine months later, the toddlers refuse to leave the parents who have raised them.

Shahabuddin Ahmed says he took his wife, Salma Parbin, to the Mangaldai Civil Hospital at 06:00 on 11 March 2015 and that she gave birth to a boy an hour later. As it was a normal delivery, she was discharged the next day.

“A week later, my wife told me, ‘This baby is not ours.’ I said, ‘What are you saying? You shouldn’t talk like this about an innocent child’. But my wife said there was a Bodo tribal lady in the labour room and ‘I think our babies have been switched’. I didn’t believe her, but she kept insisting.”

.”When I saw his face, I had doubts. I remembered the face of the other woman in the labour room and he resembled her. I could make out from his eyes. He’s got small eyes, no-one in my family has eyes like that,” she told me.

Mr Ahmed then filed a petition, seeking details of all the babies born around 07:00 that day in the hospital.

A month later, he received the details of seven women. After looking at the records, he decided to check out “a tribal lady” as there were too many similarities in their circumstances – both had given birth to male babies, each weighed 3kg (6.6lb) and the births were just five minutes apart.

“I went to their village twice, but I could not muster the courage to visit their home, so I wrote them a letter” Mr Ahmed said.

About 19 miles from Mr Ahmed’s home is the village where the tribal couple, Anil and Shewali Boro, live with Riyan Chandra, their toddler.

The couple did not think their child had been switched until they received Mr Ahmed’s letter. But things changed when the two families met.

The first time I saw him, I realised he resembled his father. I felt very sad and cried. We are Bodo tribals, we are not like the other Assamese or Muslim people. Our eyes slant upwards, our cheeks and hands are plumper. We are different. We have Mongolian features,” says Shewali Boro.

Salma Parbin says when she first saw Riyan, she knew he was her child and wanted to do a swap right then and there, but Mr Boro’s mother rejected the proposal.

After the hospital authorities told Mr Ahmed that his report was not acceptable in law, he lodged a police complaint in December of that year.

Mr Ahmed was advised to go to court and ask the magistrate to allow a swap of the boys. But on 4 January last year when the families arrived at court to carry out the exchange, the toddlers refused to leave the parents they had grown up with.

Both kids were devastated and crying and did not want to leave their parents that have raised them.

Anil Boro says that swapping the boys now could hurt them emotionally because the children are too young to understand what’s happening.

It’s obvious the children are very attached to the families they are living with and the affection is reciprocated.