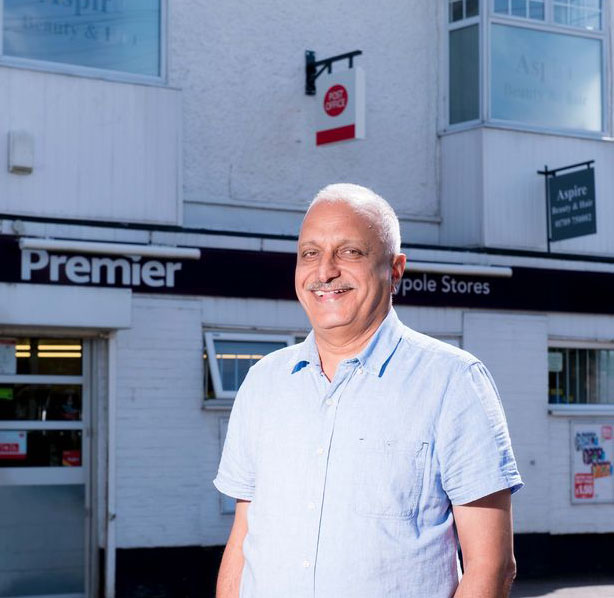 A brave shop owner put his own life on the line to protect his shop Maypole Stores on the High Street, Welford-on-Avon from armed robbers with hammers.

The incident took place on Monday 22 January at around 8.20pm

Mr Raj Sandhu 58, who has run the shop for 25 years, was emptying the cash machine when the robbers entered

CCTV footage shows how robbers armed with hammers attempted to steal money from the corner shop attack Mr Sandhu as he bravely fights back to protect his shop.

The thieves then pick up the cash off the floor while Mr Sandhu is seen shouting at them to leave.

Mr Sandhu followed the robbers out of the shop once they left, they had taken a quantity cash and got in to a Mercedes 4×4 that then went towards Bidford.

Mr Sandhu was left with a swollen and badly bruised arm.

Mr Sandhu said that following incident, he was “feeling fine but a bit shaken and bruised on one side”.

“I had the cash dispensers out from the cash machine – they didn’t know I had them as they were after the cash in the post office safe.

“But we can’t open that so they attacked me

It was gut instinct. I thought if I didn’t fight back they would hit me over the with it (the hammer).

“I was trying to get behind the counter as that is where the panic button is, but the vibrations [of what happened] set it off anyway.

“So they panicked and then saw the money from the cash dispensers.

“We’ve been here 25 years and have had break-ins but nothing like this.”

Mr Sandhu’s daughter-in-law Bobbi said: “My father-in-law was in the shop by himself and then these three guys came in and attacked him. They wanted money.

“It’s shocking but he was really brave. I’m really proud of him for being so strong during this difficult time.

“We are also very grateful for all of the kind wishes and support we’ve had from our loyal customers and local community.

“I’ve taken to Twitter to spread the word and raise awareness of this disgusting crime so we can catch these terrible people.

“So far over 1,000 people have seen the story and I hope in due course we’re able to catch these people.”

Warwickshire Police are appealing for witnesses to come forward and Det Sgt Richard Simpkins said: “Fortunately, the victim only suffered minor injuries, but he has been left feeling shaken.

“The shop is on the main road through Welford so someone passing by may have seen the incident or seen the men coming or going from the store.

“I would like to appeal for anyone who saw anything suspicious to get in touch with us as soon as possible.”

Anyone with information is asked to call Warwickshire Police on 101, quoting incident 384 of January 22, or contact Crimestoppers anonymously on 0800 555 111 or via www.crimestoppers-uk.org.