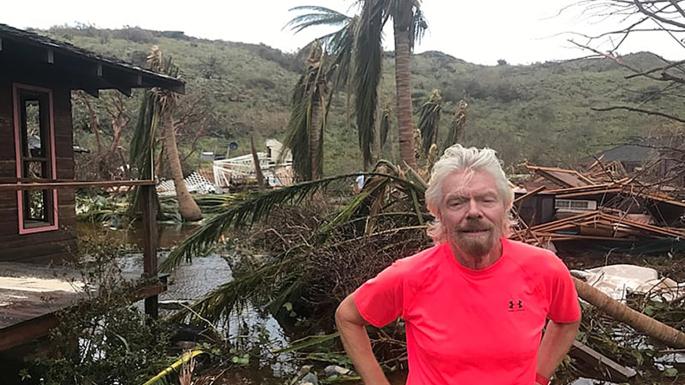 Sir Richard Brandon says that Hurricane Irma has destroyed or badly damaged most of the buildings and vegetation on his Caribbean island, Necker.

The business magnate says he has visited the nearest islands to Necker and has seen “first-hand how ferocious and unforgiving this storm was”.

Necker is among the 50 British Virgin Islands.

Sir Branson took refuge in the wine cellar of his home on the island. He emerged to discover the damage the Category 5 hurricane had done to Necker

Five people in the region have been killed by the hurricane, which passed through the islands in the middle of last week, and the BVI’s premier has asked the UK to give long-term support.

“We felt the full force of the strongest hurricane ever in the Atlantic Ocean. But we are very fortunate to have a strong cellar built into Necker’s Great House and were very lucky all of our teams who stayed on Island during the storm are safe and well,” said Sir Branson.

He said the “story is about the tens of thousands of people who have lost their homes and their livelihoods”.

“We have spent the past two days visiting team members who live on Virgin Gorda and as many people as possible, distributing aid, water and supplies. We have seen first-hand just how ferocious and unforgiving this storm was.”

Sir Richard is currently in Puerto Rico, a few kilometres to the west of the virgin islands, “to further mobilise aid efforts and rebuilding plans for the British Virgin Islands and wider Caribbean”.

He said he would be talking to various governments, aid agencies and the media, and would be heading straight back to the British Virgin Islands to continue helping the recovery effort on the ground.

The territory of the British Virgin Islands is self-governing, with the Queen of England as its head of state.

Orlando Smith, current Premier of British Virgin Islands, said “We are a resilient people but this has shaken us to our core.

“A comprehensive economic package for reconstruction backed by the UK Government will be needed over the long-term in order to return to normalcy.”

Communications are mostly down in the region following the extreme weather conditions.