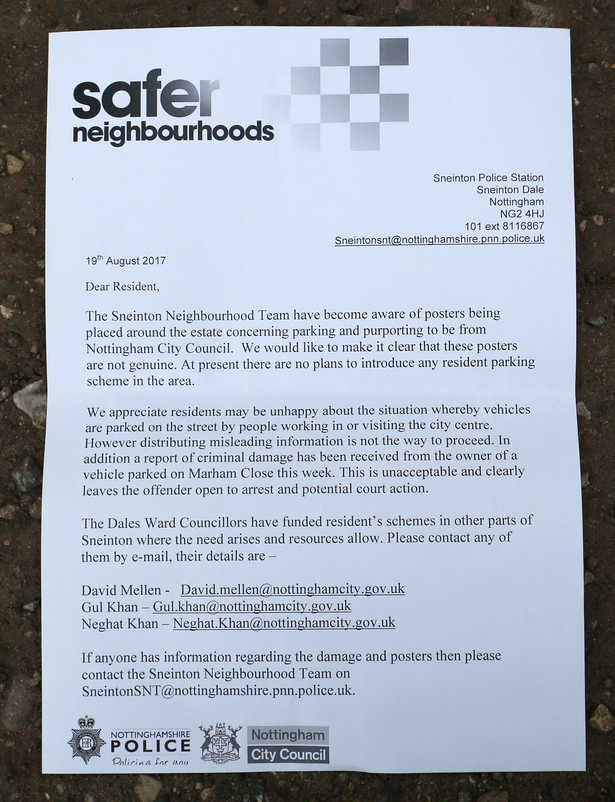 Fake parking notices have been posted in Nottingham warning cars they could be fined for parking in residential areas.

Posted in Marham Close, Sneinton, the letters, claiming to be from the council, advise drivers they could be fined £120 or have their vehicles removed by a “toe truck” (sic).

Police have said that the notices are “not genuine” and Nottingham City Council has said it is aware of the “fake” letters.

Nottinghamshire Police have also said that they have received one complaint of a car being criminally damaged whilst parked on the road.

David Mellen, councillor for Sneinton, said that whilst the resident was clearly “annoyed”, they should not have taken the matter into their own hands.

“They’ve done their homework… yes, the letter might look official, but without anything on the roads, a sign and markings, then it won’t be effective,” he said.

The letter content claims that double yellow restrictions are soon to be applied to the road as a result of “many complaints of cars being parked and left while owners are working to avoiding paying for parking”.

The Council, however, have stated they have not received any complaints of the like and have no plans for parking enforcement in the area.

“We are aware of a fake letter being put up in parts of Sneinton regarding double yellow lines,” they said.

“We can confirm that we have had no complaints from residents regarding parking issues in the Marham Close area.”

They added, “although a few schemes are happening in Sneinton, there will be no parking enforcement in that area.”