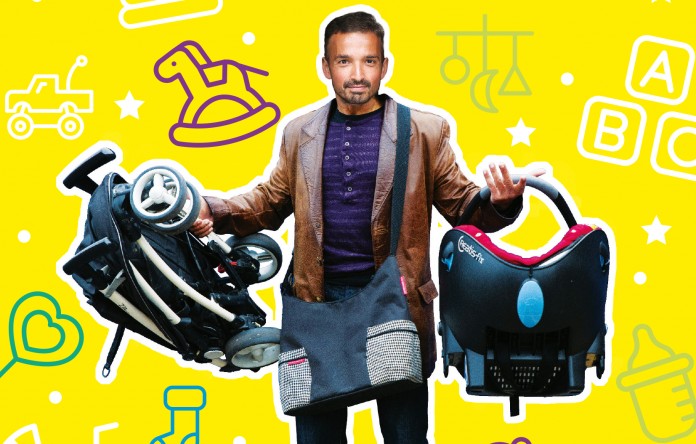 Mehmood Khan’s 1957 epic Mother India set the precedence of moulding Indian women into the idealistic maternal figure; a representation of strength and empathy. As we soon approach International Women’s Day in March that celebrates all forms of female empowerment, co-incidentally, between the 2-4 March, Waterman’s Art Centre in Brentford, London hosts Dadism – a solo male show about the experience of an Asian male becoming a first time father in his forties starring Jason Kavan.

Written by actor, producer and writer Anjali Mya Chadha, the comedy, which is the first of a trilogy surrounding the first three years of a new dad’s experiences, raises questions about identity. It explores what it means to be a man and father whilst navigating traditional gender roles, and the cultural norm of dads being providers rather than carers.

Having previously written the Dateless wonder, a show that was nominated for the Meyer-Whitworth award, Anjali explains in her own words, the concept behind this unique one man show.

“Dadism is a solo comedy show about a 40-something man becoming a dad for the first time. It’s a comical look at parenting and double standards. In this first show I explore the experience of the pregnancy through a man’s eyes, in particular, what happens to the non-carrying parent? It’s based on the real life experiences of male friends. Everything in Dadism has happened.”

Where did the inspiration from Dadism arise from and how does a female voice represent this.

“Most of my male friends are now married with children” She continues, “Some of the stories they had to tell… and I’m thinking, ‘I need to write this’. As it so happened I was writing a series of 5-minute monologues for a project I created with comedian Caitlin Power, set in a modern day polyclinic. It’s a collection of talking head pieces. One of the characters is a new dad. As I wrote it, I couldn’t keep to the 5-minute length and before I knew it, there was this full length stand-alone piece. It just developed a life of its own. There were just so many experiences to capture. There have been some people, thankfully not too many, who find the concept of a woman writing from a man’s point of view strange. But as a writer, you do your research… Every experience the lead character goes through has happened in real life. It’s about how you capture that as a writer.”

Anjali Mya Chadha has a successful track record in comedy. As well appearing in award winning shows including ‘Little Britain’ and ‘ Mitchell & Webb’, Anjali recently played the role of Ayesha in ‘Made Visible,’ at The Yard Theatre, London. She created and toured her own successful solo show, ‘The Dateless Wonder,’ and went on to work as a storyline associate in the British Teen Soap ‘Hollyoaks’. Anjali is a much sought after social commentator, and can often be heard on a wide variety of radio talk shows -from girlie issues to modern politics.

Whilst women are marching for equality across all forms of profession, Anjali’s cleverly thought narrative aims to break the stereotype of Asian men in general being represented as void from emotions.

“When I go to the theatre I don’t see me on stage. I rarely have. Adding to that, I don’t see the people in my life, in particular the men. Taking that one step further, I don’t see the Asian men I know”, she says, “The voice of Asian men is underrepresented. And the voices that are out there stay within a close cluster of issues, such as honour-based violence or terrorism.

What I recognise is men that have normal lives, jobs, concerns, family and friends; who are partners and fathers. That’s where Dadism came from. A subject that is universal for a lot of men whatever their background. Universal human experience has always formed the basis of my work. I said exactly the same thing when I wrote my previous show. Rather than looking at all our differences, my work will always celebrate what connects us, something we can sometimes be all to ready too forget..!”