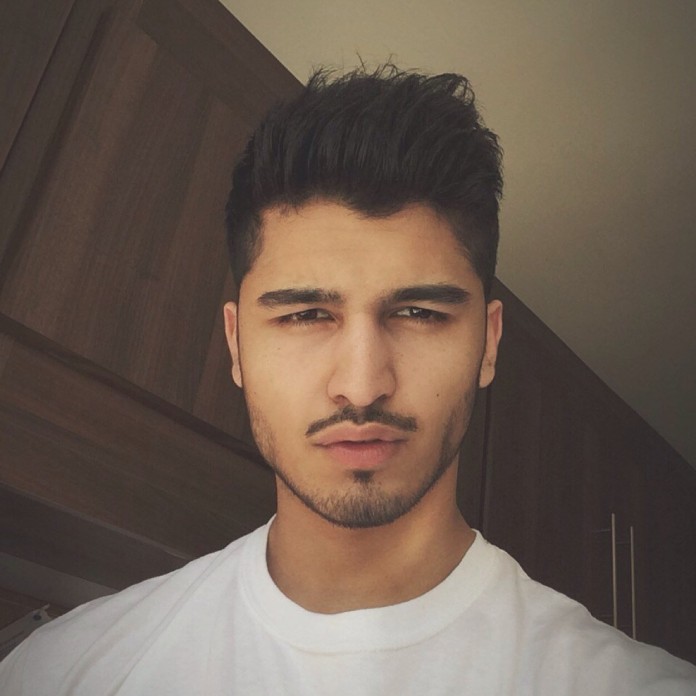 The self-acclaimed 21-year-old, Lord Aleem was filmed in a dispute with police officers who stopped him in Digbeth for a check, just hours after he took a delivery of £550,000 Lamborghini Aventador SV Roadster.

In the footage, an aggravated Aleem stands in front of the passenger window filming the police officers saying: “Why you looking at me? Trust me bro, my shoes are probably worth more than your ******* wages.

The crowd catcall and a camera crew stand in front of Aleem filming the entire incident.

Aleem Iqbal brags that the video will be going on YouTube “tonight” and speaks to the enchanted crowd before he drives off in the direction of Selfridges.

Just hours before, Aleem took a proud delivery of the new white supercar, with registration 41EEM, saying that he was: “Lost for words.”

He said in a statement: “Having had time to reflect on what happened and having spoken to his family, Aleem would and also like to apologise to the police officers involved for the way the situation escalated.

“Aleem would like to stress that what wasn’t shown in the video was the police officers involved harassing him and forcing him to pull over for ‘having cars follow him’.

“Yes, Aleem admits he can get carried away from time to time and said, “I’m tired of being harassed by police just because I’m young and drive nice cars.

“Although that doesn’t excuse my behaviour towards the police officers in the video, I hope this paints a clearer picture as to why I reacted the way that I did.”

Adam Yosef, editor of the ‘I Am Birmingham’ website, who caught the footage said: “As I turned on Moat Lane in Digbeth, I saw a small crowd shouting and cheering outside the outdoor markets, opposite the Bull Ring Tavern.

“As I moved in closer, I realised it was local car enthusiast Aleem Iqbal in a confrontation with a couple of police officers in front of a gleaming white Lamborghini supercar, which I assumed was his.

“I wasn’t surprised he was driving the vehicle, or that it appeared police had stopped him. What did surprise me was the abuse and insults he was hurling at the two officers, who were then forced to get on their way.

“I wasn’t sure if he was genuinely being arrogant and rude, or whether he was putting on a show for his film crew of around three young camera men. Either way, I felt it was uncalled for and disrespectful.”

A West Midlands Police spokeswoman said: “We stopped a car on Upper Dean Street / Moat Lane at 7.45pm on Friday for a routine check. Checks were made within four minutes.”

Mr Brewer said Aleem was flying out to Lebanon today to visit a refugee camp after raising close to £1,300 through his Just Giving page.

He added: “Aleem loves to share his experiences with his young fans and often uses them to reach out to under privileged kids and inspire them to achieve.

“As well as using the cars to do good, Aleem is also a passionate campaigner for the Syrian refugee crisis and is actively raising funds to help those in dire need.”