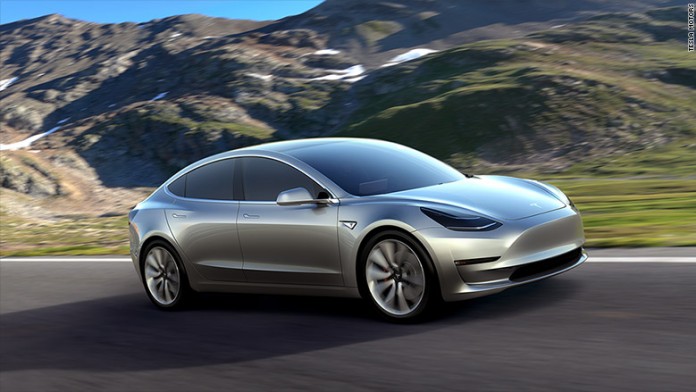 The first ‘affordable’ electric car has been unveiled by car maker Tesla, who revealed that 130,000 orders have already been taken for the mass market model despite production not being planned to start until the end of next year.

With its production being described by the company’s chief executive Elon Musk as the concluding step in the company realising its dreams to develop a “mass market, affordable car”, it’s no surprise Tesla stores in California saw car enthusiasts queue overnight to place a deposit for one of the most highly-anticipated electric cars.

The unveiling of the Model 3 Sedan prototype in California revealed a grille-less four-door vehicle featuring a roof made entirely of a panoramic pane of glass stretching from the front to the back. With only a narrow bar of actual roof dividing the windshield from the back window, the roof affords passengers a near-complete view of the sky above their heads.

As common with electric cars, the Model 3 delivers a strangely quiet drive despite the acceleration being wicked quick with the ability to go from 0 to 60 in under 6 seconds.

Understood to include an automatic lane-changing feature, the car’s dashboard has mounted upon it a rectangular touchpad screen situated between the front seats which serves as the sole information display in the Model 3.The car is expected to cover at least 200 miles on an electric charge, almost doubling the current range available to drivers of cars available in the same price range.

Set to increase its car production numbers to 500,000 by 2020, up from 50,000 last year, the company is also planning to increase its international store count to 441, doubling the existing numbers by the end of 2017.