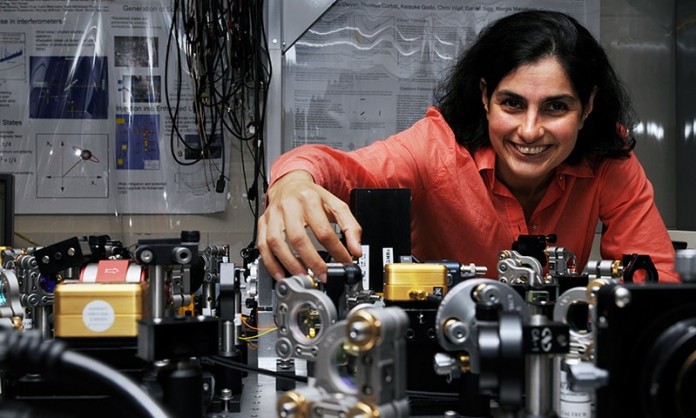 “I grew up in a family where the stereotypical gender roles were not really observed,” Dr Mavalvala says. “So I grew up thinking women can, must and should do anything and everything. That is very important for me.”

A Pakistani-born scientist has been praised for being part of the team who detected gravitational waves in space.

Dr Nergis Mavalvala is a Pakistani-American astrophysicist, who is also a professor at Massachusets Institute of Technology.

The Pakistan Prime Minister Nawaz Sharif in a recent statement said “Mavalvala is a source of inspiration for Pakistani scientists and students aspiring to become future scientists.” The Prime Minister also added “The entire nation is proud of her valuable contribution.”

Mavalvala was among the eagle-eyed team of scientists who , for the first time, observed ripples in the fabric of spacetime called gravitational waves.

The detection of these waves confirms a significant prediction of Albert Einstein’s 1915 theory of relativity and opens an extraordinary and unprecedented new window onto the cosmos.

Professor Mavalvala worked alongside other researchers at the US-based underground detectors Laser Interferometer Gravitational-wave Observatory (LIGO) Lab working on building sophisticated sensors that can detect gravitational ripples created from the collision of two black holes about 1.3 billion years ago and these ripples had been hurtling through space to reach earth on September 14th 2015.

Dr Mavalvala, 47, born in Karachi to a Parsi family. She spent her primary schooling years in Karachi, moving to the US in her early years and as a teenager she graduated at Wellesley college in 1990 with a BA in physics and astronomy.

“I started graduate school working in cosmic microwave background, which is another area of astrophysics,” she told the Kavli Foundation in 2010 after receiving the coveted McArthur Fellowship.

“The group I was working in was moving to another university, and so I was kind of shopping around and bumped into Rai Weiss.”

Weiss along with Robert Forward had in the early 1970s proposed designs based on which LIGO was formed.

Dr Mavalvala devoted herself into research on gravitational waves. By the time she received her PhD in 1997, she was already working on building LIGO.

Dr Mavalvala’s work on gravitational waves has spanned for over 20 years leading up to the discovery.

“The big picture mission drives you. When you work in the lab, [it’s like] you bang your head against the wall for weeks at a time, working on a state-of-the-art circuit, for example,” Mavalvala told MIT’s site in 2014. “Yet this is what enables scientific discovery, when the smaller to bigger pieces of experiments succeed, when the whole thing does what it is supposed to, and then you hope nature gives you the event you’ve been waiting for.”