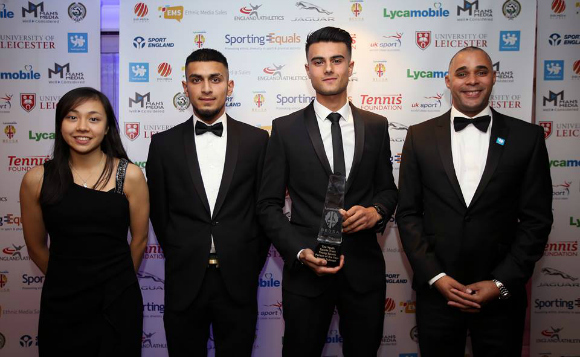 “I wanted to hear the ring announcer saying Bruno the new world champion of the world. And I was privileged to hear that in 1995. That was my legend and no one can ever take that away from me.”

Following on from the success of their inaugural year, the award ceremony, in partnership with Sporting Equals, was a star-studded event, with some familiar faces in the crowd, as well as some new sporting-personalities.

Designed to recognise and celebrate the contributions made by black and ethnic minorities, the awards served to drive change in the sports sector by highlighting more role models, from more communities in more sports.

Awards included ‘Youth Sport Trust Young Sports Person of the Year’ which was taken by Easah Sulliman, Aston Villa and England under-17 defender.

Para-badminton player Rachel Choong, who made history by winning three gold medals at the Para-Badminton world Championships in Stoke Mandeville, was grateful to be taking home the award for ‘UK Sport Inspirational Performance of the Year.’

As well as honouring the well-known characters, The BEDSA’s serve to highlight the efforts of those behind the scenes working tirelessly to make a difference in their local communities.
This was best shown with the ‘Jaguar Unsung Hero of the Year Award’ being awarded to Raza Sadiq, a founding member of Active Life Club in Glasgow, who has dedicated countless hours to the initiative.

The last and final award of the night was one of great magnitude; boxing legend Frank Bruno MBE received the accolade of ‘Sporting Equals Lifetime Achievement Award.’

In his acceptance speech the former British Boxing Champion said: “I think back to the time when I was a child and Mohammed Ali was fighting at the point where I wanted to be a world champion.

“I wanted to hear the ring announcer saying Bruno the new world champion of the world. And I was privileged to hear that in 1995. That was my legend and no one can ever take that away from me.”

The British Ethnic Diversity Sports Awards 2016 act as proof that success is dependant and your hard work and perseverance and is irrelevant of your background or shortcomings.
The night was a huge success in honouring these British sports-personalities personal and prominent achievements.

Huge congratulations to all the winners from The Asian Today.

The Jaguar Unsung Hero of the Year Award
Raza Sadiq

The PFA Coach of the Year
Sivakumar Ramasamy

The Sporting Equals Sportswoman of the Year
Jessica Ennis-Hill CBE

The Lycamobile Sportsman of the Year
Lewis Hamilton