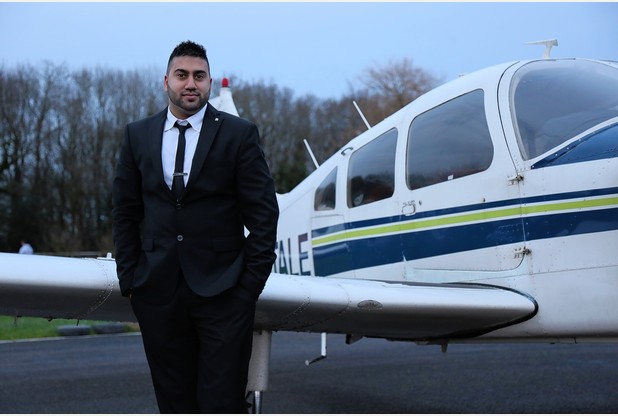 Sajid Rashid, 26, of South Broadway Street, is to a receive a British Empire Medal (BEM) for his services and efforts as he joins a select few bestowed with the prestigious title.

The aero engineer employed by Rolls-Royce, in Derby, said he felt ‘honoured’ to be awarded the BEM in the 2016 honours list, especially after earning the gong at such a young age.

Mr Rashid said: “My reaction when I first opened the letter was ‘wow is this really for me?’

“It just shows that when your work is sincere and you are dedicated in whatever you take up then you do get recognised.

“There is no financial gain for myself in this, however helping others and knowing that the work you carried out is beneficial for the community and making lives better and safer makes it worthwhile”.

Mr Rashid started off as a volunteer for Staffordshire Youth Service and worked his way up to become a Millennium volunteer after promising to help youngsters around East Staffordshire set up somewhere for them to go – like youth centres – in their spare time.

His journey then took him to Uxbridge Community Centre, in Uxbridge Street, Burton, as chairman, and then following on to be vice-chairman, where he re-generated and ‘turned the centre around’ by improving the venue for all in the community.

In addition to these achievements, Mr Rashid has literally thrown himself into fund-raising challenges as part of a bid to back charities close to his heart.

From skydiving at high velocity, up to speeds of 120mph for the people of Gaza, conquering his fear of heights in the process, to fund-raising outside in the street with a bucket in his hand, Mr Rashid is always doing his bit for charity.

“I have actually done two sky dives in recent years, one to raise money for people in Gaza, and the other for the Philippines aid missions after Typhoon Haiyan in 2014.

For each BEM recipient, a profile is provided by the Cabinet Office, explaining why they feel the person was deserving of such an accolade.

Here is what they had to say about Mr Rashid and his contributions to Burton and his charities: “His impact on the community has been profound, without him the community centre would not be as popular and successful as it is today.

“The community centre was derelict, unorganised and badly managed. He has done an exceptional job of transforming and regenerating the centre.

“In 2009, when he was only 20, he was elected as chairman at the community centre. He took on the challenge of starting a regeneration programme, he took on responsibility for chairing meetings, liaising with the community and the day to day operational running of the centre. He developed a programme of improvements and took steps to ensure that they were quickly carried out. When his term as chairman ended in 2012, he decided to stay involved with the project and was elected vice-chairman.

“He arranged for the car park to be renovated, double glazing to be installed and for a new heating system.

“He has taken the centre to new heights by securing new funding, engaging with different sections of the community and ensuring that the facilities are well used and maintained.”

Mr Rashid vows to continue his work for the community and continue to fund-raise for those in need.

He said: “All of this is just amazing to be honest – I never expected to receive something like this. It’s not something many people will be honoured with, I’m proud and it is nice to be recognised like this.”

The British honours system recognises people who have made achievements in public life or committed themselves to serving and helping Britain.

They usually have made life better for other people or be outstanding at what they do.