A Personal Journey to Seek Answers

By Maryam Awan
On December 16th 2014 the world stood stunned at the news from Pakistan. Armed militants attacked a government run school. The thick fog in this war ran deep with over 140 children martyred. For their families, it’s a day that will forever be steeped into their lives. Maryam Awan travelled back to the country on a personal journey to see the impact the tragedy has had on the school, the children and the families, including her own.

Although the media had been covering the story in some depth during the time, I felt many questions had remained unanswered. I travelled back to Pakistan to make sense of exactly what happened. My aim was to meet children and teachers who had survived to gather an eye witness account of the events which took place on the day of the shootings. I wanted some of my own personal questions to be answered for example, who has been held accountable? Why did it take place? Etc.
I remember the night before the attack very clearly. I had been speaking to my cousin via Facebook, he was telling me about some new songs I should listen to and how he was missing England and hoped to visit in the summer. This conversation must have taken place around 1am UK time. I woke up the next day around 10am to numerous text messages, telling me my cousin had passed away. At this moment, I had no idea which cousin the messages were referring to. I then called home to hear my mother in tears; I explained I had received a number of text messages telling me my cousin had died however no name was mentioned. She told me Yaseen had been injured and my parents would be flying out to Pakistan on the next flight.
I then put the news on; I remember seeing images of my uncle on sky news. He was standing in CMH hospital screaming and hitting himself, I remember hearing the words APS attack so clearly. I then called home again, this time my father answered the phone, he told me Yaseen had been martyred. I began to scream and couldn’t make sense of anything. I opened up my facebook, my first notification was from Yaseen. As I went through my newsfeed I had realised the extent of the massacre which took place.
An emotional 9 day trip came to an end and never have I witnessed such distressing scenes. 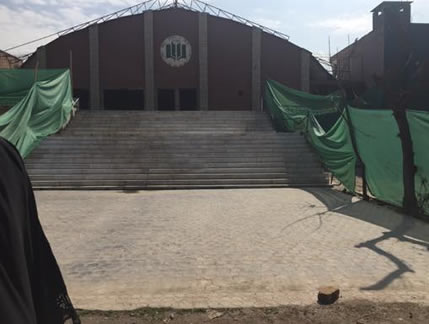 I visited the Army Public School (APS) where on December 16th 2014 over 150 children were martyred, including my 15 year old cousin  Muhammad Yaseen. As I entered a classroom, out of a total of 29 desks, 7 were occupied, the remainder carry a memory. Standing in Yaseen’s classroom, looking at his desk brought me to tears.
Every single empty desk carries a memory. Memories of innocent children’s chairs tucked neatly underneath their tables eagerly awaiting their return.

A class teacher wept as she spoke of the ordeal, “I will never forget those young men, those faces, those smiles. I often shouted at them for talking during class, how I wish I could hear their voices again.”
The Auditorium where Muhammad Yaseen, along with the majority of others, lost their lives lay bare. Once an assembly hall for award ceremonies and shows, it was now a hall filled with labourers knocking down walls.
As I stood at the spot where he was killed and I felt fear, perhaps just an ounce of fear Muhammad Yaseen felt when a grown man came to him with a gun and shot him. I felt anger, anger as to why this took place? Negligence? This remains an ongoing ‘investigation’ by the military. From examining the school, I have my own thoughts on who is to blame for the attack and how it could have been prevented, however, this was not the purpose of my visit.
One child sat next to Yaseen, Rafiq Bangash, Shaheed Mubeen Shah Afridi and watched the ordeal. He told me how he managed to escape however, for Yaseen it was too late, he was killed instantly. Another child bumped his head on the table and lay unconscious throughout the attack. When he woke he escaped unharmed and ran to the army officer who assured him, “everything is fine, we have it all under control”. Each survivor I met shook as they recollected their accounts however; every single boy said the same thing, “One day, when we grow up, we will get justice.”

Allah (SWT) says: “And We will surely test you with something of fear and hunger and a loss of wealth and lives and fruits, but give good tidings to the patient.” This, I witnessed by the mothers. Their weeping eyes and pain which shook through their voices, their sunken eyes were enough to reveal the extent of their anguish.
My aunty and uncle are still broken. Yaseen was their only child, so for them they have lost everything. Along with many of the parents they have had intense counselling and are beginning to come to terms with what has taken place, 6 months later.
Not once did any mother question their faith. Not once did they question the Al-Mighty as to why their sons were taken so young. Instead they said, “To us our son was beautiful, Allah (SWT) loved him so much he wanted to him back quickly.” As a Muslim, my faith in Allah (SWT) was strengthened. I realised although he tests us, he never burdens us with that which we do not have the ability to bear. All the mothers I met had the same three requests from the government; for their sons memories to never be forgotten, for this ordeal to be taught in history and for their sons to be awarded with the ‘Nishan –e- Haider” (Pakistan’s Highest Military Award for Bravery).
I met a specialist psychiatrist who had flown in from the U.S. independently to support the mothers and attended a pyschotrauma therapy group. The mothers spoke. They explained how they would wake up throughout the night screaming. They explained how their sons were still alive in their hearts and some spoke of their difficulties consoling their partners. They had begun to accept their sons would never return however, they spoke of how they would never accept the manner in which they were killed. To comprehend the concept of sending your child to school to learn and for him to return in a coffin is one which is far beyond my capacity. 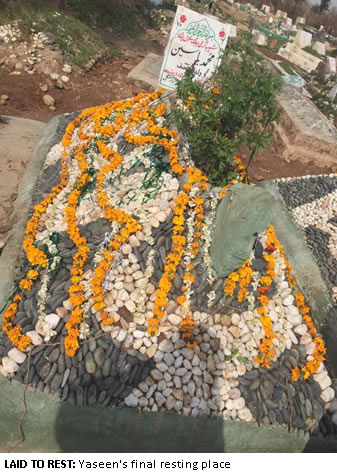 We plan our lives, we plan it all. We plan our wedding day, before we are engaged. We chose our children’s names before we are married. We plan our careers before we have completed our exams. We make 3, 4, 5 and 10 year goals. We think we will live until are head is filled with grey hair and our skin wrinkled from ageing. I learnt death isn’t reserved for people of a certain age. It will hit me and it will hit you. Death does not wait for age or location.
Looking through my photo stream filled with footage from the week, the one pictured was most poignant. You may ask why? Why not the school or his desk? Let me explain, people often dream of hundreds of beautiful flowers on their wedding day. I witnessed a mother place flowers on her 15 year old child’s grave as she wept and said, “Son, I had dreams for you, for your wedding, for your life, you left without saying goodbye.”
As my shadow overlooked his grave I was reminded, “”Indeed we belong to Allah, and indeed to Him we will return.”
To all the martyred children and staff of APS I salute you for your bravery and I will never let your memory die.