A number of racist graffiti attacks have taken place recently on the University of Birmingham’s campus, leading students to feel too threatened to attend lectures.

Undergraduates at the university spoke out against the latest anti-Muslim vandalism which were found in the university and police are conducting an investigation into whether the hateful message is connected to an earlier incident which involved a Nazi swastika being drawn onto a wall. 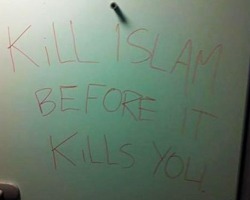 The most recent message, which read ‘kill Islam before it kills you’ was found scrawled in red writing in toilets within the university’s Edgbaston-based art block.

Responding to the incidents, the university’s Islamic Society, Jewish Society and Black and Ethnic Minorities Association have rallied together against the racist attacks in a 150-strong protest.

Hana, a 20 year-old second year law student who aided in the protest’s organisation said: “Islamic and Jewish students feel threatened at the moment. They don’t feel safe. I know some students who refuse to go to university at the moment due to what’s happened.

“We want the university to step up security especially at night and come up with an action plan to deal with this.

“The protest has been a great success and has brought together students from a wide range of different ethnic backgrounds and religions.”

A spokesman for the University of Birmingham said that they were supporting police in the matter and a full investigation was underway.

“The University of Birmingham removed all graffiti as soon as it became evident,” he said.

“The University continues to work with West Midlands Police to identify those responsible. We are also working with the Guild of Students directly and through our Good Campus Relations Group, and with the University’s multi-faith Chaplaincy.

“The University of Birmingham is a community of 150 nations situated in a vibrant multi-cultural city and we are extremely proud of our diversity.

“We will actively challenge discrimination of any kind and continue to strive to strike a balance that ensures vigilance against any form of potential extremism or discrimination while also protecting freedom of speech.”

A spokeswoman for West Midlands Police said: “Police continue to investigate Islamaphobic graffiti reported at the University of Birmingham in Edgbaston and a mosque in Selly Oak.

“Three reports of graffiti have now been reported at the University and one at the Mosque.

“Officers launched an investigation after the graffiti was discovered on Saturday 17 January.

“Two further incidents were reported to officers on 24 January when graffiti was discovered at two toilet blocks at the University. It is believed that these incidents may have occurred between the 18 and 22 January.”