The final day of the 2nd Test ended with plenty of time to spare as Pakistan wrapped up Australia’s chase with a clinical display of spin bowling. 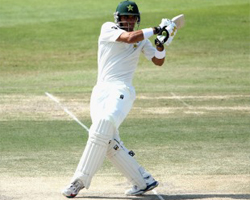 Australia had a sliver of hope of drawing the match when they started on their overnight score of 143-4 with Steve Smith and Mitchell Marsh looking comfortable against the spinners, rotating the strike with ease but a miscue off a turning delivery by Mohammad Hafeez had Marsh caught at leg slip for 47. Brad Haddin, despite his injured shoulder, walked in next and he, along with Steve Smith, who was eyeing his first century of the series, resisted Pakistan till lunch.

Pakistan’s spinners ran amok on Australia immediately after lunch, with three wickets falling in the three overs right after lunch without any runs scored, reducing Australia from 238-5 to 238-8, with Yasir Shah and Zulfiqar Babar proving too much for Australia’s batsmen to handle. Steve Smith, after playing doggedly, fell 3 short of his century. Australia’s last two wickets lasted less than five overs and added eight runs before Yasir Shah and Zulfiqar Babar sealed the win, picking up the last two wickets in the 88th and 89th overs respectively, sealing a 356 run victory to conclude a 2-0 thrashing of Australia. The first match ending with a 221 run win for Pakistan. 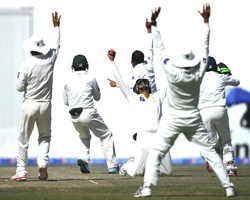 Much was said about the threat posed by Australia’s pace attack, particularly Mitchell Johnson but Pakistan’s batsmen, who were under immense pressure prior to the series on account of a string of poor performances, proved up to the task. Misbah-ul-Haq and his men were clinical and ferocious in equal measure and the result is a much needed series win and it would surely be all the more special given that it came against a team Pakistan has not beaten in a series for 20 years.

Trojan Horse Inquiry ‘Must be Tough’