The year 2014 represents the 100th anniversary of the first world war but we find the world in greater conflict that ever. We have the atrocities in Syria and in the Middle East in particular the ethnic cleansing in progress with thousands being slaughtered. We have a stand off between the new Prime Minister of India and his counterpart from Pakistan, and the long term conflict between Palestine and Israel. And of course we have the incursion of the Russia army into Ukraine. This last conflict has led to trade sanctions from the EU which the Russians have reciprocated with a ban on agricultural products from the EU.

If you combine the above with the looming election in the UK, the business climate is unclear as it has been for a while. The Eurozone is running at two speeds with the normally strong northern countries such as Germany, Italy and France struggling and the previous stragglers Spain, Greece and Ireland showing strong growth. The deflationary gloom in the Eurozone is dismal news for exporters as is the strong pound which has led to drop of profits for many firms both large and small.

But of course there is a counterbalance – the UK is enjoying a sixth consecutive quarter of growth and the fastest growing economy in the G7 group of countries.

So what should businesses make of this confusing picture – one where the UK is doing well but the remainder of the economies not so. 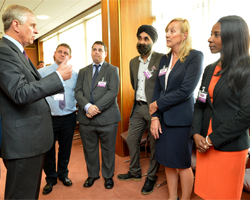 Despite the rate of inflation being only 1.5% in the UK, the outlook for the economy remains fragile with a threat of raising interest rates to starve off the housing boom. Businesses have to remain innovative, customer centric and invest in their workforce with an emphasis on quality to ensure that they remain ahead of global competition. Investing in the youth is important if we are to maintain a skilled workforce into the future. Indeed Prince Andrew on his recent trip to the Black Country emphasised the importance of such investment.

The world is a smaller place and never been so connected as now. The acceleration of technology makes all business models vulnerable to attack and no business whatever its size is immune from global forces both political and economical – there is one certainty and that is – we can never guarantee certainty!