Amir Khan Raises Over £218,000 at Launch Dinner for the Amir Khan Foundation

Last night, August 14, at The Hilton Deansgate hotel in Manchester, boxer Amir Khan hosted a glittering fundraising dinner for the launch of the Amir Khan Foundation, raising a staggering £218,000 for the new charity (Charity Number 1158078).

Set up by Amir to enable him to be even more hands-on with his charity work, the Amir Khan Foundation will provide crucial support to disadvantaged young people in the UK and worldwide. It will help communities and charities in need of support, from a local football club needing a new kit, to communities abroad hit by a natural disaster or a crisis. 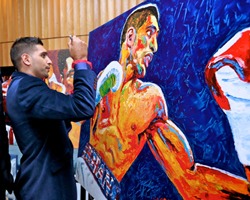 The Amir Khan Foundation will work with international delivery partner, The Penny Appeal, and use the funds raised to support numerous projects including the building of a new orphanage, school and well in the deprived Gunjur region of Gambia.

Highly emotional speeches from Amir and the Amir Khan Foundation team brought to life the aims and aspirations of the new charity. Amir also shared details of his recent trip to Gambia where he visited communities in desperate need of support and the site where his orphanage will be. 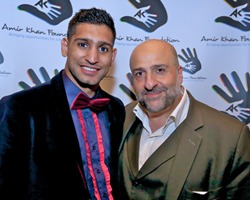 The evening was packed with entertainment from Omid and his comedy sketches, as well as high energy performances from a Britain’s Got Talent dance group from Manchester, the Shockarellas. Guests also dug deep for rare auction items, which included a signed pair of Mo Farah’s running spikes, Muhammad Ali signed shorts, and a signed Lewis Hamilton racing suit.

Amir explained: “We’ve been working on plans for the Amir Khan Foundation for a long time, so I’m extremely proud to have raised so much on our first ever event.

“The total amount exceeded all of our expectations and I’d like to thank everyone who came along – it was a fantastic night.
“My recent trip to Gambia with the Amir Khan Foundation team really helped bring my dreams for the charity to life and I hope the money raised will help to make a real difference to communities over there.”

Aamer Naeem, CEO of Penny Appeal added: “We’re delighted to be working alongside Amir and the Amir Khan Foundation to help facilitate their great plans for the charity. The evening was a huge success and it’s great to work with someone who is so passionate – and this is just the start of great things to come for the partnership.”