Five arrested in search for ‘Straight A’ student Zoya Anwar 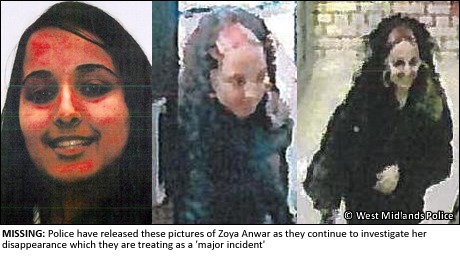 POLICE have arrested five people over the disappearance of a Walsall student.
Eighteen-year-old straight ‘A’ student Zoya Anwar was last seen by school friends on the afternoon of Tuesday 26 February when she said goodbye to her friends at the school gates. Her disappearance was not reported to police until 1st March.
‘A’ level student Zoya Anwar, who should be picking up her A Level exam results, is a student at King Edward Vi School in Handsworth.
Zoya was reported missing on Friday and a missing person investigation was immediately launched. As this investigation progressed, concerns have grown for her safety and today police are asking the general public for their help to find her.
Zoya is described as Asian, slim build, 5ft 6ins tall and has shoulder length black hair. Detectives have released three images of Zoya – one in her school uniform and the other two in normal clothes.
Four men and a woman, aged between 27 and 48 and all from the Walsall area, have been arrested on suspicion of kidnap in connection with Zoya’s disappearance. They are all known to Zoya. They were arrested on Tuesday and remain in custody helping police with enquiries.
Det Supt Jo Chilton, from the force’s investigation team, said: “Zoya has never been missing before and it is very out of character for her. Whilst we are keeping an open mind, we are very concerned for her and need to know she is safe and well as a matter of urgency.
“We are carrying out extensive enquiries to trace Zoya with specialist officers from across the force working around the clock to try to find her.
“We are looking into a number of possibilities around Zoya’s disappearance including her running away from home, her being taken against her will or any worries Zoya may have had herself. At this stage we cannot rule out anything more sinister and we looking into all possibilities.
“We are treating this as a major incident and we are doing all we can to find Zoya.”

A dedicated call centre has been set up where people can give information on Zoya’s disappearance – 0800 092 0410. Calls are free from UK mobiles.
House to house enquiries, forensic searches and local enquiries have been conducted over the last few days and these will continue until she is found.
Friends of Zoya from inside and outside school are being spoken to as part of the investigation.
Det Supt Chilton is appealing directly to Zoya: “If Zoya hears this appeal herself, I want her to know that she is not in any trouble we just need to know that she is safe and offer her help.”
Officers continue to liaise with staff and pupils at Zoya’s school and the local community.