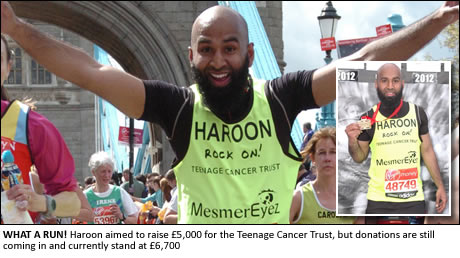 HAROON Mota has taken on the biggest challenge of his life – running the London Marathon for teenage cancer sufferers.
It was Haroon’s first ever marathon and what a run it was – completing the race in an amazing 5 hours and 11 minutes.
Haroon battled through painful cramps during the run knowing the thousands he had raised was going to a worthy cause.
The seasoned fundraiser, who has already trekked up Mount Everest and even scaled three of the UK’s highest mountains in just 24 hours, raised a phenomenal £6,700 for the Teenage Cancer Trust.
The former Coventry City Council worker spends his days surrounded by young cancer sufferers as part of his job as a Senior Activity Coordinator at University College London Hospital where he provides recreational and therapeutic activities to help youngsters normalise their daily lives.
Haroon, who commutes from his hometown of Coventry to London every day, says watching youngsters suffer is “heartbreaking” – and was determined to do his bit to help the Teenage Cancer Trust which offers vital support to cancer sufferers.
And Haroon reveals it was thought of those ill youngsters and those he has watched lose their lives which spurred him on during the grueling Marathon run.
“I started the run and thought it was amazing to see so many runners, men, women, young and old,” he told The Asian Today.
“There were so many runners in crazy and colorful costumes and with the crowds, the atmosphere was amazing. I found myself breaking into tears at mile 8, but just remembering why I was running and passing thoughts for all those patients I have lost over the year spurred me on. It had bottled up since I started working on the Teenage Cancer ward at UCLH over a year ago and I felt a sense of relief after I let it out.
“I knew I couldn’t give up, because the thought of my patients fighting cancer and never giving up, made my pain feel so insignificant.”
Haroon’s family were in London to cheer their charity champ on during the race. And for his wife, watching Haroon fundraise for the Teenage Cancer Trust took on an added significance.
“My wife lost her sister through cancer a long time ago,” Haroon reveals.
“She was only aged 9 when her sister past away at the age of 14. It was only up until last year when I started working on the Teenage Cancer Ward that I began to understand what this meant to my wife and her family. So going a step further beyond my work to raise money and complete the London Marathon is something my wife is really proud of.”
Haroon has surpassed his original fundraising target of £5,000 with the figure now standing at £6,700 and rising.
“The support has been great and MesmerEyez.com have donated a huge £900, giving me a massive boost right from the start. I’d like to say a big thank you to Coventry Muslim School who raised £400 with a bake sale and non uniform day.
“Stoke Park School in Coventry, my former employers, also the school where I did my A levels, have raised £750 through a non uniform day.”
With his first marathon well and truly under his belt Haroon is already planning his next fundraising initiative and he isn’t planning on doing it alone!
He says: “I thought that the London Marathon would be my first and last marathon, especially during the run, as I was thinking “I’m never going to do this again”. But after returning home and watching the highlights on TV, and reminding myself of what I achieved I feel very tempted to give it another try.
“I’m hoping to run the Coventry Half Marathon again in October, and intend on making it an annual habit. This year, I’ll be recruiting locals from the community to join me, running the 13.1 miles on 14th October to raise funds for Coventry Muslim School, a very small private girl’s school, which could really do with some funding. “I’ve had almost 30 people express an interest in joining me, so I hope they all agree to sign up when I start recruiting. 2012 is a great year to embrace change and to try living a healthier, more active lifestyle. With Coventry hosting Olympic Football at the Ricoh arena too, it would be great if the Asian community could be part of sporting events that the city has to offer. I really enjoyed the event last year, and was amazed at how little the Asian community was represented in this event. So I’m hoping that I can change that his year by encouraging others to join me.”
Donations are still rolling in for Haroon’s London Marathon fundraiser. If you would like to contribute you can donate online at justgiving.com/run4tct or text “HTCT85” & amount “£” to 70070.