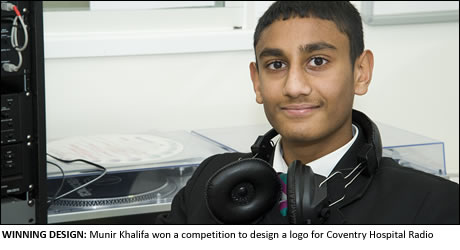 A COVENTRY student has won a competition to design a logo for Coventry Hospital Radio based at University Hospital, Coventry.
Munir Khalifa from Sidney Stringer Academy beat other hopefuls to the prize.
The competition was organised by Neil Wilkes, a schoolteacher and volunteer radio presenter at University Hospital, who wanted to let the children of Coventry take part in the ‘new look’ station.
Neil first had the idea to involve schoolchildren after hearing about the Workplace Challenge, an initiative to let pupils from the local school complete real projects in a working environment.
Munir, 16, learnt about the competition during a graphics lesson at school and was inspired to take part by his love of music. Munir said: “My design is quite simple but it combines an image of music and with the heartbeat of the hospital.”
Joan Wright, Chairman of Coventry Volunteer Services, said: “Young people get such bad press these days but it is great to know that youngsters from Coventry are taking an interest in their local hospital and community.”
Tara Court of the station said: The logo competition was devised to give young people in Coventry a chance to get involved in their local community radio station. I was delighted with the variety of entries and really pleased with the winning entry which will be used to brand our station for the future.
“This is especially relevant as we move towards the celebrations of our 40 year anniversary.”