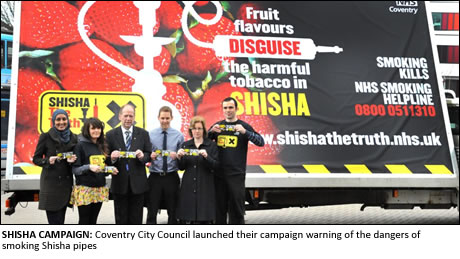 THE facts about shisha smoking have been unveiled by a brand new campaign launched by NHS Coventry and Coventry City Council.
The fruit scented tobacco which is smoked through an ornate waterpipe is becoming increasingly popular – particularly amongst young people.
But there are concerns that many are under the false impression that shisha is a safer alternative to cigarettes.
And the new campaign launched by Coventry City Council aims to highlight the dangers.
Dr Tanya Richardson, Consultant in Public Health at NHS Coventry, said: “In reality, shisha smoking has been linked to the same kinds of diseases as cigarette smoking including heart disease, cancer, respiratory disease and problems during pregnancy.
“Shisha tobacco contains a mixture of sweet smelling fruit, molasses (sugar) and herbs it is easy to understand why many people are under the impression that it is a less harmful type of smoking. The bubbling water also creates the illusion that the smoke is being purified and cleaned.”
Councillor Joe Clifford at Coventry City Council, added: “We hope that this campaign will give people the information they need to make an informed choice. Shisha is emerging as the tobacco version of the alcopop and we fear could provide an easy route for young people to start smoking.

The Council is also aware of the sudden rise in the number of shisha bars in the city and is currently leading a joint partnership initiative to make sure that they are fully aware of all the legislation linked to sales of tobacco.”
NHS Coventry is encouraging anyone who wants help to stop smoking shisha to access one of the city’s stop smoking services who will be able to provide practical advice, guidance and support to help them quit.