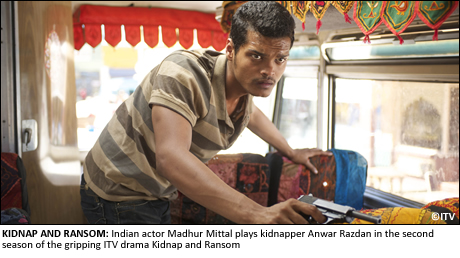 ITV’S gripping drama Kidnap and Ransom is back on our screens later this month for a second season.
Trevor Eve returns as international hostage negotiator Dominic King and this time he’s negotiating the release of the Mehtas, a British Asian family kidnapped while on holiday visiting their son in Kashmir.
Indian actor Madhur Mittal – best known for playing Salim in the Oscar-winning Slumdog Millionaire – plays kidnapper Anwar Razdan.
Here he reveals how he got involved in Kidnap and Ransom and how he hopes to move to London to pursue his acting career.
What prompted you to want to star in Kidnap and Ransom?
I was in Mumbai when I read the script. I thought it was great. I loved the activity; there is so much happening. I think it’s a great project to be a part of.
I thought my character, Anwar, was great too. He’s a very human guy. He’s not that bad a person as you first think he is. He’s very grey, which is how most people normally are and it’s his situation that has made him the kind of person he is – the pressure of putting food on the table, growing up without any education, in a really poor family. Kidnapping is something he is pushed into by his circumstances.
When the handover for the initial kidnapping goes wrong, Anwar ends up hijacking a bus full of tourists. How does Anwar try to maintain control in a situation that is spiralling out of control?
To be honest, when he gets on that bus I think he is more scared than anyone else because he’s just witnessed the death of his father. He’s on a bus full of foreigners and there are policemen all around him and snipers pointing at him. There is no way out and he didn’t plan any of it.
Anwar is so scared that he’s scary. He himself doesn’t know what he’s going to do and that unpredictability is frightening for everyone. I think it’s a real test of his character because it’s as extreme a situation as you can get yourself into.
What was your approach in playing Anwar?
Anwar is so organic and so real, I wanted to just feel his character and do it rather than research similar characters. He’s a very simple guy and there’s not that much complexity to him.
How does Anwar compare to other characters that you’ve played?
Anwar is very different to other characters I’ve played because he is really just doing this because he needs to rather than because he wants to. In Slumdog Millionaire I played Salim, and he loved being a bad-ass because he loved to show off and loved the money. However, for Anwar it’s need because he’s trying to get his family out of the gutter. I don’t think he’s ever going to do this again; it was a one time thing. I have never played anyone who gets pushed so much to the extreme.
Do you like Anwar as a character?
I very much like Anwar because he loves his parents and respects his family. I can relate to him on that level. I think family is the one constant throughout life and if you don’t have very good relations with them or don’t respect what they’ve done for you it’s very sad. I am whatever I am because of my family.
How does Anwar view Dominic King, the hostage negotiator?
Anwar knows Dominic is there to try and help them all. I think there is a mutual admiration between the two of them. Dominic knows it’s not Anwar’s fault as he didn’t ask for this to happen. Dominic understands his psyche. I love the relationship between both characters.
The drama is set in Kashmir but was actually filmed in South Africa. Did you enjoy filming in South Africa?
It was wonderful filming in Cape Town. The city is amazing. Between filming days I went surfing and climbed mountains. The people were always smiling and happy and I enjoyed their good music, great food and beautiful landscape.
As a native of India, did the dressed sets remind you of home?
I was born in Agra, where the Taj Mahal is, but have been living in Mumbai for 15 years with my parents and my younger brother. We moved to Mumbai because I wanted to be an actor.
The sets in Cape Town do remind me of home. I think it’s quite believable what the production achieved, with all the props and finding the right locations. They used proper old Indian cars and rickshaws and the policemen look exactly the same.
Do you hope to do more British drama?
I’d love to do more drama in the UK and hope to move to London. I’ve done a lot of work at home in India but I’d like to grow as an actor and do more variety of work.
Also, I want to come to London as I have never done theatre and I really want to. I used to be a stage performer. I started off as a dancer and I used to be a Michael Jackson impersonator – I did more than a 1,000 shows all over the world before I was 13 years old. I then moved on to acting so I would like to bring these two things together.
Kidnap and Ransom, ITV 1, Thursday 23 February, 9pm