Residents urged to have their say 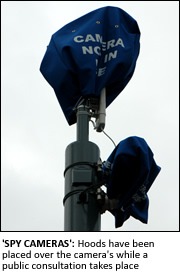 REPRESENTATIVES from West Midlands Police and Birmingham City Council have met with selected residents for a meeting regarding the installation of ‘spy camera’s’ in predominantly Muslim areas of the city.
The Project Board was set up following uproar over the installation of more than 200 anti-terrorist surveillance cameras in predominantly Muslim areas in Birmingham.
The spy network, which consists of 169 ‘ANPR’ cameras capable of checking car registration numbers, and 49 CCTV cameras, were put up in the Sparkbrook, Moseley and Washwood Heath areas of Birmingham by the Safer Birmingham Partnership.
Critics have said the cameras, some of which are hidden, are being used to spy on the Muslim community after it emerged the initiative was financed through a counter-terrorism fund.
Local councillors and representatives from the community say they were not consulted on the camera network called ‘Project Champion’.
Following widespread criticism officials were forced into a climbdown, moving to place protective hoods over all of the cameras. “Cameras Not in Use” signs have also been fixed to street columns
The new group, which is chaired by Assistant Chief Constable Sharon Rowe from West Midlands Police, is made up of representatives from Birmingham City Council, Safer Birmingham Partnership, West Midlands Police Authority and independent members of the public who live locally.
“The Project Board has been set up with the aim of securing the best possible outcomes for the community and identify how we can rebuild trust and confidence,” said ACC Rowe.
“We want to use these cameras to focus on local policing priorities.”
An independent group to support the project group, made up of local residents, has been formed to support the Board as a ‘critical group’, providing a view from the local community’s perspective. Two members of the group will sit on the Project Board to ensure a community perspective as we move forward.
Over the next few weeks the force is expecting to meet with representatives from the office of the Surveillance Commissioners, the independent watchdog whose role is to monitor the use of covert surveillance, to review the use of cameras in the area.
Councillor Ayoub Khan, Cabinet Member for Local Services and Community Safety, said: “I am delighted that the project board has been established to oversee the developments of the CCTV and ANPR camera scheme, known locally as Project Champion. I hope that local communities will feel reassured by this action and see that we are treating their concerns seriously. We are taking steps forward towards a rollout of the community consultation exercise and I urge everyone living in the area to use this opportunity to have their say in determining the future of the scheme.”
Related Articles
Big Brother Climbdown
Apology over city ‘terror cameras’ that ‘spy’ on Muslims