Home Interviews Asian Music: Made for the Mainstream 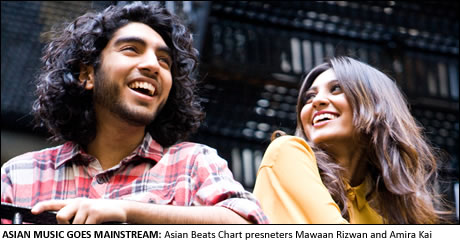 ASIAN music has gone mainstream.
A new two-hour show – ‘Asian Beats Chart’ – showcasing the best of Asian music kicked off across 4Music and Kiss TV last month.
Presented by newcomers Mawaan Rizwan and Amira Kai, the show will prove to be a vital platform for artists hoping to push on into mainstream music. We caught up with Mawaan and Amira for a quick chat…
Tell us a bit about the programme?
It’s an insight into some of the artists that are working hard on the Asian music scene in this country and internationally who could, with some mainstream media support, stand a chance at crossing over into mainstream music charts to gain bigger profiles.
What do you think of the Asian music scene?
It is fresh and quite vibrant but it lacks direction. We are not trying to re-invent the wheel with this show but more so we hope it brings a larger audience to this scene which has promised so much over the years with the likes of Jay Sean and Raghav so hopefully if all goes well, in time, there will be new artists like Arjun, Tara Priya and Sonna Rele coming through into mainstream success too.
If you had to choose one track that you really liked in the top 20 then what would it be and why?
I guess it would be “Brand New Day” by Sonna Rele because this girl has been a monster talent from a young age. I don’t know anyone else who can play guitar both left and right handed, play the piano flawlessly, write their own songs and look so good in the process!
Why Kiss tv and 4Music, is this the right time for an Asian Beats Chart show to go mainstream?
Well this is a question for the show’s producers really but Kiss TV are part of the Box group of music TV channels owned by Channel 4 and Bauer Media and I know the producers struck up a mutual business vision with these guys. Also Box TV are the country’s leading music TV group in terms of audience so I guess it was a natural fit for this idea.
Do you think that too many people try and become the next Jay Sean rather then find their own sound?
No I think the individuality is there but mainstream media seems to unfairly say “why do we need anyone else when we have Jay Sean?” No one says that about Rock bands, R&B artists or Pop acts but it is the same old story that gets wheeled out for Asian artists. Hopefully, if things work out then we can help to change that perception a little?
How were you both spotted for the presenters jobs?
We sent in clips of ourselves to the producers, from Youtube postings we had done and simply got asked to audition. Then to our surprise, we won the auditions!
If you could change anything about the Asian music scene so it goes more mainstream then what would it be?
Nothing. I would change some of the key people in charge of playlists at key radio stations in this country so that as a music genre it receives the same amount of attention as other genres such as Urban. It would however, be good if more artists took advice from managers who have a proven track record of success in mainstream music rather than taking too much work on themselves. Artists need to realise that they are artists and managers are managers. The best advice I was ever given was that listening gets you a lot further than talking (although not when you are presenting a TV show of course).
What’s been the reaction since the first showing of the show on Kiss FM?
On the whole pretty positive. You always get haters in life but thankfully people have embraced the idea of this show on a mainstream channel so lets see what the future holds.
How bigger deal is it to have the show shown on 4Music – being the largest music channel in the UK?
Extremely huge and this shows everyone that Channel 4 are serious to make a real go of this concept.
What will you be doing on Feb 3rd at 9.30pm?
Watching the repeat showing of the Asian Beats Chart on 4Music with all our family and friends! I feel another party coming on!!
Asian Beats Charts show can be seen on 4Music at 9.30pm on Feb 3rd