Home Sports Cricket stars of the future learn from the best! 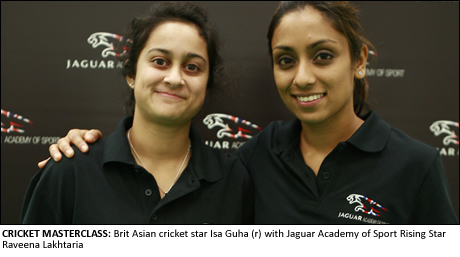 BRITISH Asian cricket star Isa Guha has been passing on her World Cup winning skills to cricket stars of the future.
The 26-year-old England star was on hand to teach a selection of young cricketers new skills at a Cricket Masterclass.
The special event was organised by The Jaguar Academy of Sport which aims to recognise, celebrate and inspire the very best of British sporting talent and success.
Among the youngsters was Jaguar Academy of Sport Rising Star Raveena Lakhtaria as well as cricketers from the Sporting Equals programme, an independent, not-for-profit organisation with which the Academy works in partnership.
The Masterclass was held at the Hertfordshire Sports Village and allowed the young cricketers to learn from Isa focusing on all the necessary skills to become a great cricketer including bowling, batting and fielding.
Speaking about the day, Isa, who is a Member of The Jaguar Academy of Sport, said: “I’ve really enjoyed myself and it’s been fantastic to be able to work with youngsters who have a real desire to compete at the highest level. I hope everyone has learnt something new, which they are able to use in future training and matches.”
And one person hoping to emulate the success of Isa is young Jaguar Academy of Sport Rising Star Raveena Lakhtaria.
“It has been a great opportunity to be able to work with one of England’s best female cricketers,” she said.
“I have learnt such a lot and can’t wait to put it to good use. This is just one of a number of opportunities I have had through the Jaguar Academy of Sport’s Mentoring and Education programme, and the information provided by some of the world’s best sportsmen and women is so valuable to me succeeding.”
A spokesperson for The Jaguar Academy of Sport added: “Isa made her Test debut at the age of 17 against India and as of 31 December 2008, she was ranked the number one bowler in the ICC Women’s One Day International rankings.
“This kind of success is a great inspiration to the Academy’s Rising Stars and to be able to learn from her through a cricket master class is a great opportunity.”