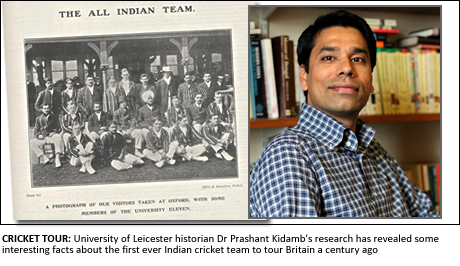 FASCINATING details of the first ever Indian cricket team to tour Britain a hundred years ago have been revealed by a Leicester historian.
While players such as Sachin Tendulkar and Mohinder Singh Dhoni are more familiar names associated with the Indian cricket team today, a century ago the team consisted of a number of un-heard players including a state ruler and one-eyed player!
Details have been revealed by University of Leicester historian Dr Prashant Kidambi whose research has been featured in a widely acclaimed essay in the 148th edition of Wisden Cricketers’ Almanack, the world’s most famous sports reference book
It tells the long-forgotten story of the extraordinary tour a century ago and places it within the wider context of changing Indo-British relations.
During the course of his Leverhulme Research Fellowship funded research project entitled ‘Sport and the Imperial Bond’, Dr Kidambi uncovered several previously unknown aspects of the tour.
It is usually assumed that the tour was principally the initiative of Maharaja Bhupindar Singh of Patiala and that he was its principal sponsor. In fact Dr Kidambi’s research revealed that a number of other individuals – especially Parsi businessmen based in Bombay – played a critical role in the organisation of the tour.
Indeed, Bhupindar Singh only joined the tour after most of the arrangements were in place and once the team got to England the prince took very little interest in the cricket tour after the first few matches had been played.
Equally interesting was the discovery that the imperial establishment kept him under close surveillance throughout the tour, worried about the way the newly enthroned prince would conduct himself in London during the coronation festivities of King George V.
Another fascinating fact that came to light during the course of Dr Kidambi’s research was that one of the Muslim cricketers in the team – Shafaquat Hussain – was one-eyed. He is thus part of a very select group of cricketers – the best known being the late Nawab Mansur Ali Khan (‘Tiger’) Pataudi – who have played the game at the highest level with only one good eye.
“The 1911 tour was a fascinating venture made up of an improbable cast of characters,” Dr Kidambi says.
“The team’s flamboyant captain, Maharaja Bhupindar Singh, was the newly enthroned ruler of one of the biggest Indian princely states and had an apparently insatiable appetite for the high life.
“Its star bowler – Palwankar Baloo – was from an ‘untouchable’ caste, the lowest rung of the Hindu social hierarchy. The rest of the team was drawn from different parts of the subcontinent and belonged to different religious communities: Hindu, Muslim, Sikh and Parsi.”
And it was in Leicester – now home to thousands of Indian cricket loving fans – where the team recorded their first every victory on UK soil.
“Leicester has an interesting place in the history of this tour,” Dr. Kidambi adds.
“It was at Leicester that the Indians, after suffering a series of defeats, won the first game of the tour, defeating the local county team by seven wickets.”
“Through an analysis of this key sporting event, my essay in Wisden highlighted the significance of a distinctive moment in the early twentieth century, when ideas of imperial belonging and nationalist self-expression simultaneously co-existed in uneasy tension.”
“Furthermore, it pointed to the ways in which cricketing ties between the two countries were forged by trans-national networks of individuals and institutions.”
Dr Kidambi has also contributed a widely praised essay on the iconic Indian cricketer, Sachin Tendulkar, in the recently published Cambridge Companion to Cricket.

An Unprecedented Step Against Domestic Abuse