Home News Charity Champ Jamil’s on Top of the World! 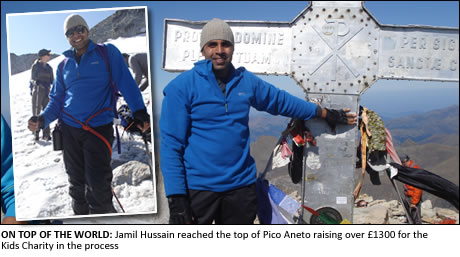 ‘AMAZING, INCREDIBLE, TIRING’ – these are the words used by one Birmingham father to describe one of the most rewarding experiences of his life!
Jamil Hussain  braved treacherous conditions as he scaled the highest mountain in the Pyrenees in aid of the Kids Charity – and returning to his family home in Moseley, the father of three reflects on an experience he won’t be forgetting in a hurry.
It may have taken two days for the 34-year-old IT Consultant to trek up Pico Aneto, in the Pyrenees, but his journey began months ago when the opportunity to take on the challenge presented itself to Jamil.
He was chosen for the fundraising trek by his employer Logica after writing a passionate application on how he wanted to help disadvantaged children.
“I guess the idea of helping children really compelled me to take up this challenge, and doing this for the Kids Charity really spurred me on that little more,” he told The Asian Today days before his trip.
To prepare himself for the gruelling trek, Jamil underwent a tough training regime which included numerous trips to the gym and carrying a rucksack full of bricks as he walked to work!
Looking back, Jamil admits the preparation was nothing compared to what awaited him as he began his fundraising trek.
“It was a lot more difficult then what I expected,” he says. “No amount of training could have prepared me for such a gruelling event.”
Conditions on Pico Aneto were tough with Jamil having to battle huge Rock Boulders, Ice Glaciers, a lack of oxygen in the air above 9000 feet, little sleep, food and water.
“We were lucky enough to have good clear skies and warm weather, however it was quite cold near the summit with a blustery wind and in the night the temperature would plummet,” Jamil says.
At one point the 34-year-old admits an opportunity arose to turn back – but no matter how physically drained he was he was adamant he would never give up.
“We had the opportunity at 5000 feet to turn back – however adrenalin and the seeing the tip of the summit led me to carry on.
“The general morale of my group really helped me and the last thing my dear wife said to me before I left the house was ‘go Jamil  – do it for the kids’. I guess without the support of your nearest and dearest loved ones such things are near impossible!”
But possible it was, and making it to the top of Pico Aneto, Jamil breathed a huge sigh of relief – he had made it!
“Standing on top of the summit at 11000 feet and looking down at some of the terrain that we had covered really makes you realise what we can achieve if we try,” he says.
Jamil returned home to a hero’s welcome. His family, who has supported his dream to climb Pico Aneto, were in awe of their new charity champ.
“My wife and family gave me a hero’s welcome on the night of my return,” Jamil says. “Huge banners, balloons, and my wife’s extra special hot curry greeted me. My daughter also painted me a welcome banner and my son gave me a big hug! Work colleagues were very supportive and keen to listen to the stories!”
Aside from personal satisfaction, the most rewarding aspect of the trek for Jamil was raising much needed funds for the Kids Charity.
As a father of three young children he knew how vital fundraising is to the charity in helping to better the lives of disadvantaged children – and the £1300 he has raised will go along way in achieving that goal.
“The Kids Company Charity do a lot of work for kids that have very little and I am sure this money is going to go a long way in helping them have some of life’s little comforts,” says Jamil.
Having experienced the excitement and adventure in scaling one of the world’s toughest terrains, will Jamil be a regular up mountains across the world?
“I think I may stick to  my desk job for the moment!” Jamil admits.
“However,  it was a truly unforgettable experience and I wish everyone at some point  puts themselves forward for such an event, it can be such a character builder!”