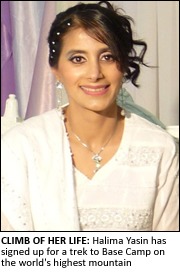 AN intrepid trekker from West Bridgford, Nottingham, is preparing for Mount Everest.

Halima Yasin has signed up for a trek to Base Camp on the world’s highest mountain, Mount Everest, in aid of Penny Appeal’s Rebuilding Pakistan Appeal, which aims to rebuild the village of Kamar Mashani in the Punjab region of Pakistan.

Countless villages in the region were swept away by the devastating floods that followed the heavy monsoon rains in July 2010, and which killed at least 1,700 people and displaced over six million others.

Halima, a Virgin Media Network Engineer who works in Crawley Village in Winchester, commented: “Seeing images of destroyed homes and such loss of life following last year’s floods inspires one to think about how we can help those who are less fortunate than ourselves. The Everest Base Camp Challenge offers the perfect opportunity to stand in the footsteps of some of the most accomplished mountaineers, reflect upon their achievements and remember those lost during the floods.

“It has always been a personal ambition of mine to reach Everest Base Camp and I’m doing a lot of walking in preparation! To achieve this goal whilst helping those in need will be hugely rewarding. I’m really looking forward to seeing Mount Everest and its flora and fauna, as well as viewing the stars without light pollution. Also, I hope that I can inspire others to take up a worthy challenge.”

At 5,360 metres, the Everest South Base Camp in Nepal offers a serious challenge for even experienced walkers, but the breathtaking panoramic views that take in eight of the world’s highest mountains will make the trek a once-in-a-lifetime opportunity.

Adeem Younis, Chairman of UK-based Penny Appeal, said: “The Everest Base Camp trek is all about remembering the plight of the forgotten victims of the Pakistan floods. We’re aiming to raise over £40,000 – enough money to build a small village of two-bedroom houses, as well as to construct wells and distribute much-needed aid packages.”

The charity trek takes place from 2nd to 18th December 2011 and Halima Yasin has set herself a fundraising target of £5,000. Donations are welcomed and can be made at www.justgiving.com/Halima-Yasin.

“It’s a challenge that will leave the group with a lifetime of memories,” said Adeem Younis, “and everyone who takes part in the trek will be making a very real difference to the lives of disadvantaged people in Pakistan.”