Boxer Khan and singer Dhami excited ahead of Derby match 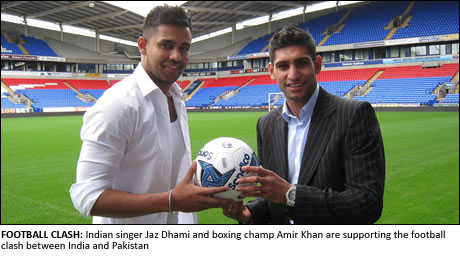 WORLD boxing champion Amir Khan and Indian award winning artist Jaz Dhami joined forces to show their support of the hugely anticipated India versus Pakistan football friendly fixture at the boxers home turf in Bolton at Reebok Stadium.
Supported by governing bodies, FIFA and The Football Association alongside Kick It Out, the friendly football fixture will take place on the 3rd September at Derby County’s Pride Park and on the 9th September in Glasgow.
The ‘Clash of the Titans’ tour will set centre stage for these two heavy weights to lock heads in a series of games up and down the UK and also give precedence to help bring communities together in a wider social message via the power of football.
World boxing champ Amir Khan revealed he would be leading the Pakistani team out at Pride Park.
“I will be attending the Derby County fixture, and I will be honoured with the task of bringing on the Pakistani team to show my support to this great footballing fixture, however I wish both teams the beat of luck,” he said.
Singer Jaz Dhami added: “I am excited to get involved and support the clash of the Clash of the Titans tour. India and Pakistan are primarily noted for their cricketing abilities and this tour will give the UK sports enthusiasts the opportunity to see these two big nations don their football boots and show what they have on the pitch.”
It is hoped the game will encourage youngsters from the Asian community to get into football.
The FA’s Ambassador Brendon Batson has worked closely with the Asian community to improve participation in the sport.
“I have worked closely with the Asian community for several years at the FA, helping to build bridges and lending support so that the Asian community may become more involved in the beautiful game,” he said.
“This fixture will hopefully offer further encouragement for Asian kids across the UK to put on their boots and prove that football is a universal and inclusive sport. There are many opportunities for Asian kids to play at the highest level possible which this fixture clearly demonstrates.”
Ahmer Kunwar, Director of TouchSky Sports adds: “This fixture presents a great opportunity for Indian and Pakistani football fans and families to come out and support their native teams and enjoy the carnival atmosphere. The match has received overwhelming support with excellent take up on ticket sales and the tour website inundated with several thousand hits per day. We look forward to putting on a great show with football, music and half time football activities with children on the pitch with stars.”
Tickets are on sale now and can be purchased by logging onto www.clashofthetitansuk.com

One way to properly learn how to consult with a narcissist is to find...

I attempted Online Dating in 6 Various U.S Metropolises. Here Is What I Found...