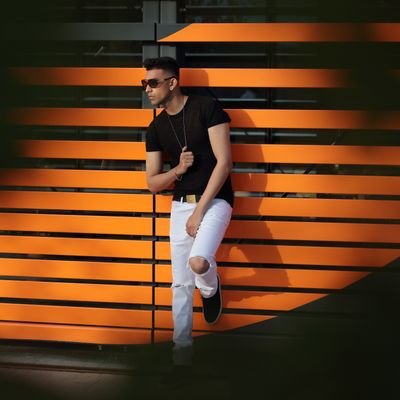 In your own words, tell us a little bit about you?

I am singer/songwriter based in London. I mainly specialise in the genres RnB and Pop. However, I will be fusing those genres with Punjabi/hindi in some of my next singles. Outside of music, I studied Economics at Queen Mary University. I also represented Surrey County Cricket Club and South of England in my teenage years.

At what age did you start writing your own songs?

I actually started writing my own lyrics at the age of 13. I would not say they were full songs but more like a few verses of a song or a chorus idea. I wrote my first complete song at the age of 17.

Growing up did you want to go in to the music industry?

I have always had a passion for music from a young age. However, I was more on for a career in cricket if you actually ask me. I represented Surrey county cricket club from the age of 11 til 16. After that, then I was selected to play for South of England. Whilst playing for them I actually stress fractured my back which led me to not being able to play cricket for about 16 months and also not being able to get selected for England U16/17. After getting this injury I was not the same player I used to be and kept on getting back injuries. From that point onwards I started taking music much more seriously and decided it was music that I wanted to give my full dedication to.

Your new single ‘Make you Mine’, what is the song about?

The single Make You Mine is a fusion of pop and punjabi music produced in a very futuristic manner. Make You Mine is for everyone, all ages giving you the fresh sound with the old skool twist.

It is about a boy and girl who clearly fancy each other. We can indirectly say they are going out. However, the girl at the same time is teasing up the boy by playing a little hard to get. But then again K Zie also likes the fact she is doing this and therefore is determined to make her his girl.

Why is this song so different to your previous songs?

This song is different to my debut release This Could Be Love in April as it is the first time I have fused both English and Punjabi in one song. This Could Be Love was a much commercial pop release whereas Make You Mine has more of an authentic touch due to the fusion of English and Punjabi but also because of the native Asian intsruments used such as the flute. In addition to this, it is the first time my song has been signed to major record label.

If you could collaborate with any artist who would it be and why?

From the UK Asian scene, I would love to collaborate with Zack Knight as he has a great voice and also has produced some fantastic songs in the last few years. I feel his style of music is very similar to mine and so I think having his and my tone of voice on one song would be a game changing vibe. Outside of the UK Asian scene, I would love to collaborate with Selena Gomez. She has such a sweet voice and has been great artist for a number of years. I feel her voice would go extremely well with mine. I also read lately that she would be up to do a song for Bollywood, so Selena if you read this you know what to do haha.

What is next for K ZIE?

In the next few weeks I will be starting the UK Make You Mine Tour which will see me going to different events/venues in London, Leicester, Birmingham and Manchester to perform Make You Mine along with a few of my other songs. I will also be doing a meet and greet for all of my fans, so would love to see each and every one of you there. So please stay tuned to my social media sites to find out all the dates of when I am in your city.

I am also currently working on new music too. I have just finished one of my new songs which I am hoping to release soon which has a more Punjabi urban vibe. In conjunction with this I am also working on musical projects with Bollywood Music Producer Harry Anand and Vee Music.