Pakistan and India meet on football pitch at Pride Park 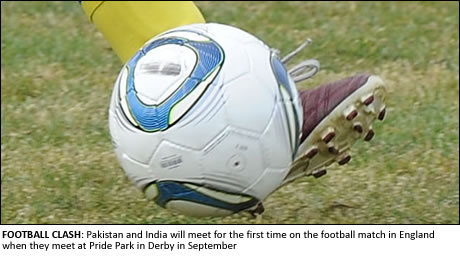 SPORT fans are accustomed to seeing Pakistan and India battle it out on the cricket pitch – but not next month when the two sides meet in a mouth watering clash on the football field in Derby.
The two long-standing rivals will come to England and Scotland for the first time in a huge boost for British Asian football fans.
Billed as the ‘Clash of the Titans’, the Asian sub-continent’s most powerful sides will meet on September 3 at Pride Park Stadium, Derby and on September 9 in Glasgow, Scotland.
The match has received backing from high profile members from the sports and entertainment world, including England and Manchester United defender Rio Ferdinand.

“I am welcoming the India and Pakistan teams to the home of football,” said Ferdinand.

“This is a major breakthrough for both nations and I hope to see myself in India and Pakistan soon.”

“Football is one of the most popular sports amongst the Asian community in Britain and this match will prove to be very successful because of that,” said Khan.

“I’m sure these matches will also be very beneficial for relations between the two countries because sport plays an important role in helping to unify people. I’m very excited about these games because it’s always thrilling to see two rivals go up against one another.”

‘Bend it Like Beckham’ producer and director Gurinder Chadha was excited about the clash.

“I will be shouting Bend it like my Bhaiya’s, Bhaijans and Bros,” said Chadha, while A1 Grand Prix champion Adam Khan, who is of Pakistani descent added: “It’s great to see these two nations playing head to head on an international platform – I can’t wait.”

The respective association presidents have both hailed the match as a crucial step in their respective development.

“Playing Pakistan is always special. I’m sure all sporting fans are eagerly looking forward to it,” said Praful Patel, president of the All India Football Federation.

Makhdoom Faisal Saleh Hayat, president of Pakistan Football Federation added: “This match will definitely go a long way in promoting bilateral relations between the two countries. I wish everyone best of luck.’’

The English FA has also backed the match to increase participation from the Asian community.

“I am really pleased to support this match which opens doors for aspiring Asian footballers in England giving them sense of national pride,’’ said FA spokesperson Jonathan Mills.

The match represents the continued commitment by TouchSky Sports to focus on emerging footballing nations and assisting the development and growth in regions where football is in its infancy but gathering huge momentum.

“By touring in England, the home of football, these two nations not recognized for their football prowess will play on one of the worlds largest football stages and many up and coming young players will fulfil their lifelong dream of playing in England” said TouchSky Sports FIFA Match agent Clem Leech.
For more information on the match log onto www.clashofthetitansuk.com

Over 40,000 People come together for UK’s Biggest Faith-Based Day of Social Action

SURVEY SHOWS MORE THAN EIGHT IN TEN (82%) PEOPLE FROM ASIAN COMMUNITIES HAVE EXPERIENCED...

A longside all its importance, there are many issues to polyamory, also.

Cricket in tune with Bollywood