Hit show heads to West Bromwich and you can Win a Pair of Tickets! 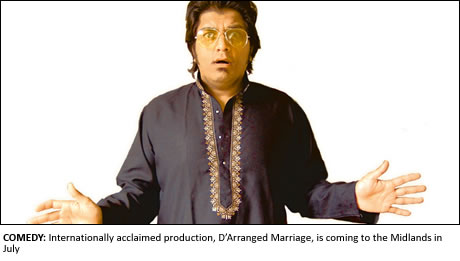 INTERNATIONALLY acclaimed production, D’Arranged Marriage, is coming to the Midlands next month.
The show has performed across the world in seven countries and will touch down at The Public in West Bromwich on Saturday 23 July.
The one man show follows the story of Sanjay Gupta, a New Zealand born son of Indian immigrants Manhur and Pushpa.
29 year-old Sanjay, played by Tarun Mohanbhai, lives at home, works in his father’s corner shop, dreams of a career in stand-up comedy, and strenuously avoids the issue of an arranged marriage. His nagging parents finally get the better of him, but to his surprise, he discovers that Neenu, the prospective bride, is the one!
Adding to the trials and tribulations are a group of friends and family that present Sanjay with a series of complications with hilarious consequences.
With all eight characters performed by one versatile actor, you have the funniest parody of Indian family life since Bend it Like Beckham, and what critics have dubbed a “roller coaster ride to laughsville.”
Linda Saunders, Managing Director of The Public said: “D’Arranged Marriage has received rave reviews across world so we’re incredibly excited for it to be coming to The Public.”
The Asian Today has teamed up with The Public to offer one lucky reader the chance to get their hands on a pair of tickets to the show.
To be in with a chance of winning just answer the following question:
How many characters does Tarun Mohanbhai play in D’Arranged Marriage?
Is it:
A) Four
B) Six
C) Eight
Just e-mail the answer with your name and address to competitions@theasiantoday.com
Closing Date: 14th July 2011
The winner will be chosen at random and notified by e-mail.
Tickets for D’Arranged Marriage are priced at £10 and are available from www.thepublic.com or by calling 0121 533 7161.