Home Competitions Win a copy of West is West on DVD! 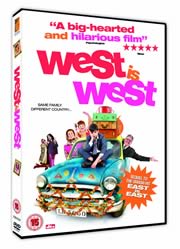 GET ready for the laugh-out-loud journey of a lifetime as the Khan family return in the sequel to the internationally acclaimed EAST IS EAST. Following its hugely successful cinematic release, the box office hit WEST IS WEST comes to DVD and Blu-ray on 20 June from Icon Home Entertainment.
Ten years after the multi-award winning first instalment, WEST IS WEST follows the Khan family as they take on a mammoth journey from Salford to rural Pakistan.  The much-loved cast return for this hilarious sequel including Om Puri (Gandhi, Wolf), Linda Bassett (The Hours, Calendar Girls), and Jimi Mistry ( The Guru, 2012).
Manchester, 1976. The now much diminished, but still equally as eccentric Khan family continues to struggle for survival. Sajid (Aqib Khan), the youngest Khan, is a bored and isolated teen, bunking off school and shoplifting to spice up his life. He is seen as the runt of the litter and under heavy assault both from his father’s insistence on Pakistani traditions and from the fierce racist bullies in the schoolyard.
In a last attempt to make a good Muslim son of Sajid, his father George (Puri) decides to pack him off to their family in the Punjab, to the wife and daughters he abandoned 30 years earlier.  Resolved to teach Sajid a lesson, the tables are turned on George when he realises it is he himself who has much to learn.
From the talented, Salford-born writer of East is East, Ayub Khan-Din brings you another heart-warming comedy about family values the world over, so if you liked the first film then you’re guaranteed to love this sequel.
To celebrate the release of the West is West on DVD we have 5 copies to giveaway.
To be in with a chance of winning just answer the following question:
Who plays the role of Sajid Khan in West is West?
A) Aqib Khan
B) Jimi Mistry
C) Om Puri
Send your answer along with your name and full address to competitions@theasiantoday.com before 30th June 2011
Winners will be notified by e-mail by The Asian Today.