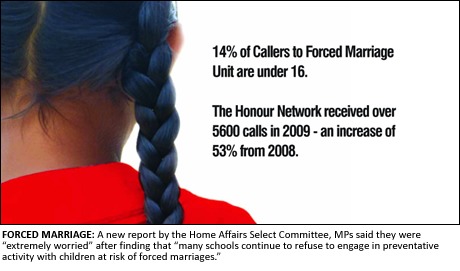 QUESTIONS have been raised about why schools are not doing enough to protect pupils from forced marriages.
In a report by the Home Affairs Select Committee, MPs said they were “extremely worried” after finding that “many schools continue to refuse to engage in preventative activity with children at risk of forced marriages.”
Now they want the Government to force schools into action at a time when specialist helplines – including one operated by the Governments own Forced Marriage Unit – register a desperate surge in calls as the summer break approaches.
The report, published today, comes three years after the Committee published a detailed Report on Domestic Violence, Forced Marriage and “Honour”-Based Violence which drew attention to the abusive practice of forced marriage.
The 2008 report noted significant weaknesses in the response from Government and frontline professionals – and today’s follow-on report said little had changed.
Among those who gave evidence to the Committee was Jasvinder Sanghera – a forced marriage victim herself who now heads the Karma Nirvana charity which specialises in forced marriages and honour-based violence.
She told the Committee: “In March 2011 Karma Nirvana wrote to the Heads and Chair of Governors of schools across the country, seeking to highlight issues and concerns pertinent to school children with a view to offering free training to teachers and governors. At the very least we requested that the school put our forced marriage posters up. Since sending the letters to a hundred schools across the country, we have only received one response expressing a willingness to participate.”
Cris McCurley, a practitioner and trainer in forced marriage and “honour”-based violence, agreed schools were failing in their duty to raise awareness about forced marriages.
She said: “I work extensively with teenage girls from the Asian communities, none of whom have ever heard about forced marriage protection in schools. What we know from the schools in this region (and from what I know from colleagues across the UK about schools across the board) is that it is not on the curriculum, it is not on the agenda, and the posters are not on the walls.”
Ms Sanghera said teachers remained unaware of how to respond to pupils at risk of forced marriage with potentially dangerous consequences.
She told the Committee in some cases the initial response from teachers “put victims at risk.”
“I had a call from a victim from Leicester and this young girl was at risk of being taken out of school,” she said.
“She told the teacher and the teacher contacted the family. Now, the first rule is you do not contact the family. Sadly, that young girl was put at risk as a result of that and still is not back at school.”
The Committee also found what it called a “disturbing link” between “children missing from formal education and victims of forced marriage and a lack of follow up from the authorities in many cases.”
A forced marriage victim told the Committee: “I was 16. I was achieving good grades; I was achieving As and Bs. They took me out of college. The college didn’t ask why I was going out, what was I going to do with my life, if I was going to carry on with my education. During this period of time, my college didn’t contact my parents, they didn’t contact me. They had my email address. No one bothered as to where I was, if I was okay, if I was still alive.”
When the Committee contacted to the Secretary of State for Education Michael Gove he told them the Department for Education had no plans to increase forced marriage awareness in schools.
“I am aware that in 2008 and 2009 the previous Government wrote to local authorities and schools during the summer term to remind them of their responsibilities in relation to forced marriage,” Mr Gove said.
“The Department did not send a similar letter last summer and I do not intend to do so this year. Schools will already be aware of the guidance available on forced marriage and I firmly believe that they are best placed to decide how to address the issue.”
The Committee said they were “disappointed” with his response, adding, “On the basis of the evidence we have received, we do not accept his assurance that “schools will already be aware of the guidance available on forced marriage” or that, if they are, they are acting on it.
“Teachers who are not trained to respond properly to cases of forced marriage can inadvertently put pupils in greater danger by, for example, contacting their families. In the light of clear evidence that many schools are not fulfilling their statutory responsibilities with regard to forced marriage, the Department for Education must provide more active support to teachers to enable them to carry out a role which may risk upsetting cultural sensibilities but is nonetheless vital for child protection.”
In other areas the report also criticised funding cuts to specialist forced marriage services.
Rt. Hon Keith Vaz, Chairman of the Committee said: “Forced Marriage is a serious issue that affects some of the most vulnerable individuals in the UK. I am very disappointed that progress on protection and awareness remains slow. I am also concerned that a loss of specialist support services due to spending cuts will stunt further progress.”
He added it was now time to look at ways of making forced marriages a criminal offence in an attempt to deter the practice.
“We believe that the best way to deter people from forcing individuals into marriage is through criminalising forced marriage,” he said.
“Taking this bold step alongside providing a range of services supporting victims of violence and raising awareness in schools must be a priority for the Government. There should be zero tolerance of this harmful activity that ruins the lives of so many.”
Related Articles
Forced Marriage Awareness Tour Kicks Off