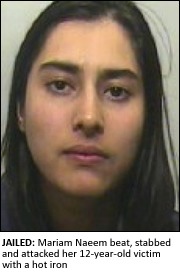 A WOMAN, who carried out a vicious attack on a 12-year-old school girl, has been jailed for eight years.
Mariam Naeem, 21, of New Hall Street, Burnley pleaded guilty to wounding with intent and perverting the course of justice at Preston Crown Court.
Naeem admitted attacking the school girl with a hot iron, burning and scarring both her forearms, stabbing her in the upper arm with a large kitchen knife and beating her about the head with a hammer at an address in Burnley on 23 June 2009.
The girl suffered serious injuries including a fracture to her skull, lacerations to her upper right arm, burn injuries to both forearms and scalp lacerations. She was treated at Manchester Children’s Hospital but still has visible scars from the incident.
Naeem was arrested after police were contacted by ambulance staff.
During her time on remand Naeem and her brother, Saqib Naeem, discussed attempting to fool doctors and officers into believing she was mentally unwell with the intention of gaining a hospital order rather than a custodial sentence.
Following enquiries by local police officers, she was then further charged with perverting the course of justice.
Speaking after sentencing, Detective Constable Matt Capper, Burnley CID, said: “This was a violent attack on a vulnerable female. Naeem has at no point shown any remorse for her actions. Not only did she violently attack the victim with weapons she also attempted to avoid punishment and a custodial sentence by pretending to be mentally ill when she was not.”
Naeem’s brother, 26-year-old Saqib Naeem, of New Hall Street, Burnley, also pleaded guilty to perverting the course of justice and was given a four-month suspended sentence and 180 hours community service.