Home News The Climb of his Life 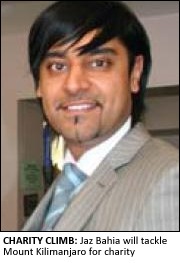 JAZ Bahia admits he’s always fancied going up in the world – and he will with a climb up Mount Kilimanjaro.
The West Bromwich Building Society employee will take to the skies up Africa’s highest mountain this September to raise money for Macmillan Cancer Support.
His charity drive will coincide with the 10th anniversary of the Black Country Asian Business Association (BCABA) of which Jaz is a board member.
BCABA will host a special awards dinner in June and have chosen to support Macmillan Cancer Support’s who are celebrating their Centenary year.
“I know we’ve all got high hopes in life but I never quite had Mount Kilimanjaro in mind,” Jaz said about his climb.
“Yet that’s the lofty ambition I’ve set myself – to climb Africa’s highest mountain to raise money for that marvellous charity, Macmillan Cancer Support.
I have to admit that my climbing experience to date has been limited to a stroll around the Wrekin and Level 3 of Merry Hill so Kilimanjaro, measuring a modest little 19,341 ft, will be something of a challenge!”
Jaz’s climb is expected to take ten days to complete.
He adds: “I suppose, like most people, you reach a stage in life where you want to do something out of the ordinary – and, for me, climbing Kilimanjaro comes into that category. And doing this for a charity like Macmillan makes that sense of personal achievement even greater.
“While it will be a daunting challenge, helping Macmillan will make it all worthwhile. I am hoping that people will support me with a contribution which will not just raise my spirits but, above all, will raise money for this wonderful charity.”
If you would like to support Jaz log onto www.justgiving.com/jaz-bahia