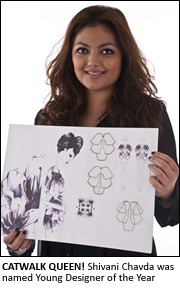 A LEICESTER student has been named Young Designer of the Year at one of the UK’s most prestigious fashion events.
Shivani Chavda, 22, from Harrow, London, is in her final year of the BA (Hons) Fashion Design at De Montfort University in Leicester and won the catwalk finals of the Young Designer of the Year 2010 competition at the Clothes Show Live at NEC in Birmingham.
She has won £1,000 prize money and a £1,000 donation to the university.
Shivani’s design, inspired by the Orient, was among ten finalists whose designs were showcased on the catwalk who included fellow DMU student Maria Ellina.
This is the second time in three years that the Young Designer of the Year title has gone to a DMU student. In 2008 Charlotte Christy won the competition which is open to fashion students from universities and colleges around the UK.

The brief for this year’s competition was to design a dress that draws inspiration from any country in the world.

Shivani has taken elements of the Orient and incorporated it into her dress. The mixture of delicate beauty and strong shapes are the defining features of her design.

She said: “It feels amazing to win and I’m hoping it will be a great boost for my career. The experience of working to a deadline for a life brief like this, and of being at the catwalk show is so fantastic.

Shivani thinks some of her creativity comes from her family and she’s inspired by the world around her: “My dad is shoemaker and I had to cover a pair of shoes in fabric to match the dress I designed so he’s especially proud of me, and my mum’s over the moon.

“To me fashion is wearable art and I base my designs around this. I take inspiration from all around me and direct it into my work, ensuring that my ideas are new and innovative.”