Victim and Prince had “master and servant” relationship 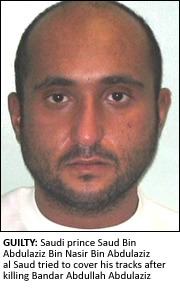 A SAUDI prince has been jailed for life for murdering his servant who died in a central London hotel after suffering appalling injuries.
The body of Bandar Abdullah Abdulaziz was found at a five-star suite he shared with Saudi prince Saud Bin Abdulaziz Bin Nasir Bin Abdulaziz al Saud at the Landmark Hotel in central London on 15th February 2010.
A post mortem examination found Mr Abdulaziz had suffered a catalogue of injuries – some historic, some recent and others having occurred within 24 hours.
These included two broken ribs, damage to internal organs, bleeding on the brain and a broken larynx consistent with compression to the neck.
Today Al Saud was told he would spent the next 20 years of his life in prison. The 34-year-old, was also sentenced to nine years – to run concurrently – having been found guilty of grevious bodily harm following an earlier attack on Mr Abdulaziz.
The Old Bailey heard Al Saud had been staying at the luxury five star hotel in Marylebone Road with Mr Abdulaziz who he described to police as a “friend” he had funded while they were travelling together.
They had arrived at the hotel on 20th January 2010, having been on holiday in the Maldives.

Detectives investigating Mr Abdulaziz’s death said his relationship with Al Saud was more like an old style “master and servant”, with Al Saud dominating the victim who appeared “submissive in his presence”.
During the trial, the prosecution said the men had a homosexual relationship and argued that there was a “sexual element” to the murder.
On the day of the murder Al Saud told police Mr Abdulaziz had been attacked and robbed sometime between 21st and 23rd January in the Edgware Road area, apparently attributing his death to injuries sustained during this alleged incident.

However, a pathologist who attended the scene said the victim appeared to have suffered from injuries within the last 24 hours, consistent with being punched and kicked.
When suspicious officers began examining CCTV from within the hotel they found footage of Al Saud beating Mr Abdulaziz on two separate occasions in one of the hotel’s lift.
In one attack Mr Abdulaziz is seen cowering, trying to cover his head and face, while passively taking the beating during an apparently unprovoked attack. 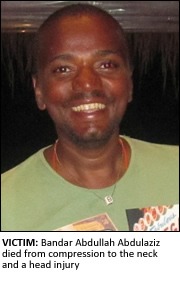 A post mortem examination found Mr Abdulaziz died from compression to the neck and a head injury.
A series of injuries were found – some historic, some recent and others having occurred within 24 hours.
Injuries identified included two broken ribs, damage to internal organs, bleeding on the brain, a severe ear injury, bite marks to the cheeks, bruising up and down legs and arms, a bite mark to his right arm and back, bruising to his neck and a broken larynx consistent with compression to the neck. There was also bruising to his face, a split lip and teeth chipped.
The pathologist told the Old Bailey the injuries suffered by Mr Abdulaziz were commonly seen in abuse cases caused by heavy punching and kicking over a period of time.

Jurors were also told Al Saud had made attempts to cover up blood in the hotel suite and had moved Mr Abdulaziz’s body from the bathroom into the hallway, to the bedroom and on to the bed in an attempt to cover his tracks.

Speaking after the verdict, Detective Chief Inspector John McFarlane, who led the investigation, said: “The defendant used his position of power over the victim to gratuitously inflict violence upon him over a long period of time.
“After the victim’s body was discovered he made every effort to evade justice, including misleading police by alleging that the victim had been robbed and then trying to claim diplomatic immunity, which he was not entitled to in the UK.
“This case clearly demonstrates that the MPS will not tolerate violence and will pursue justice for victims regardless of any complexities arising from an individual’s status and cultural backgrounds.”