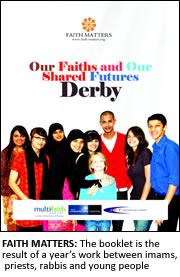 FAITH leaders are embracing a new tactic to protect young people living in Derby from religious extremism.
Christian, Muslim and Jewish community leaders are calling on young people to learn more about their own and one another’s religions, to stop them falling prey to divisive or violent interpretations of holy texts.
The call supports the release of a new booklet, Our Faiths and Our Shared Values, aimed at countering fundamentalism and promoting understanding between the city’s faith groups.
The publication encourages young people living in Derby to combat the voices of extremism and division in their communities.
The booklet is the result of a year’s work between imams, priests, rabbis and young people in Derby. Using passages from the Bible, Qur’an and Torah it explores the major religions’ shared values of mutual understanding, a rejection of violence and the protection of life.
The concept of ‘Jihad’ is also explained in the context of the daily struggles that people face in a modern and progressive country like the United Kingdom. The booklet places the Jihad for young Muslims within ‘an inner struggle to make themselves a better person’.
The booklet, produced by the interfaith and cohesion organisation Faith Matters on behalf of the Derby Community Safety Partnership, will be used as a resource for local schools, educational institutions and community organisations.
Speaking about the launch of the booklet Dr Phil Henry, Director of the Multifaith Centre at the University of Derby, said: “There is a great deal of value in exploring, across religious and cultural boundaries, how sacred texts are understood in our society.
“Examining similarities and differences in our communities allows us as individuals and collectively, to better understand our faith traditions and each other.”
Derby Community Safety Partnership’s Strategic Lead Officer for Community Cohesion, Dawn Robinson added: “Extremist groups often target young people in Derby and the UK, encouraging them to act violently on the grounds of religious beliefs.
“Young people across different communities in the city support the booklet’s aim of setting the record straight on every religion to balance these more extremist views.”
CSP Director Karen Johnson added: “This important project is part of our overall work to support and strengthen local communities by working with young people to tackle the issues that directly affect their lives.”
The booklet is available to download at www.faith-matters.org