‘Team still has to improve’, says coach ahead of Aussie Test series 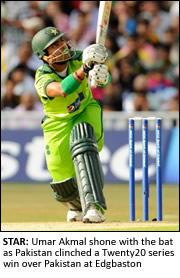 WAQAR Younis believes Pakistan will take momentum into the Tests against Australia after closing out a 2-0 Twenty20 series win at Edgbaston.
After suffering at the hands of Australia in a 12-match losing run before the series, Pakistan claimed a rare whitewash over their rivals with an 11-run win.
Only four months ago the Pakistan Cricket Board was handing down bans and fines to seven players following the disastrous tour of Australia, with veterans such as Mohammad Yousuf and Younus Khan since finding themselves on the outskirts.
In their place the shoots of a young team have been evident in the matches against Australia.
Waqar described 20-year-old batsman Umar Akmal as the “most promising player in 20 years” after his match-winning 64 in the opening game while teenage quick Mohammad Aamer claimed three wickets in each game to mark his rising star.
Waqar believes that is enough to ensure his young side will be full of confidence ahead of the first Test of the MCC Spirit of Cricket Series at Lord’s next week, although he warned his players they will still have to improve to beat Australia in the five-day game.
“I think these two wins are really going to help us to get into the momentum,” he said.
“Test matches are a different ball game, fair enough, but with victory behind you it always helps.
“It’s a Test match so we have to really come out better than this to beat these guys.
“We are looking to bring more youngsters in and rebuild the whole thing again. We lost Mohammad Yousuf, Younus Khan and Misbah ul-Haq so we are in a phase where we are bringing the youngsters in.
“Umar Akmal is extraordinary then we also have Mohammad Aamer. We have got a couple of other youngsters in Umar Amin and Wahab Riaz there so we are thinking of putting them in the Test matches and seeing how they come out.”
Australia skipper Michael Clarke said he had been confident of levelling the series after his bowlers restricted Pakistan to 162 for nine on a Edgbaston wicket conducive to runs.
Kamran Akmal had top scored for Pakistan with 33 while, for Australia, left-arm orthodox spinner Steve O’Keefe claimed 3-29 on his international debut.
Australia fell short in their chase again, despite a blistering 30 from Clarke at the top of the order after they again failed to generate a match-winning partnership, bowled out for the second time in two games.
“I was very happy with the way the boys performed with the ball,” said Clarke. “Once again, we did well to restrict Pakistan to that type of score on a very fast outfield and a pretty good wicket.
“It was disappointing once again with the bat. We lost wickets at important stages and couldn’t build a partnership at the top and again through the middle. It was a disappointing result and we’ve got some work to do.”
Clarke also forecast a tough test for his team in the upcoming Test series after admitting conditions could suit Pakistan’s swing bowlers.
“If it’s overcast in England, it generally swings all day,” he added.
“Pakistan’s bowling was outstanding again today. I think we can learn a lot from the way they bowl at the death. Umar Gul is outstanding and they are going to be tough opposition in the Tests.
“They are going to have a very good attack so our batters are going to have be at our best. I imagine they will get the Duke ball to swing in conditions which, if it is overcast, are going to be quite tough.
“I think we are going to be in for a really good Test series.”

Hookup With Shemales. “How perform I hookup with shemales ?”

Jay Sean lands US Number One