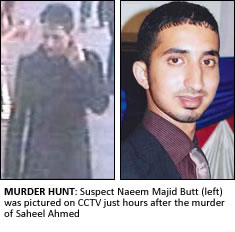 DETECTIVES investigating the murder of a 24 year old man in Lancashire are stepping up their hunt for the man wanted in connection with the killing.
The body of Saheel Ahmed, 24, was found in an alley at the top of Warrington Street, Blackburn in the early hours of Tuesday 22 June, after police were called to a report of a disturbance.
Shortly after the attack, police named Naeem Majid Butt, 37, from Blackburn, as a man they would like to speak to as a matter of urgency.
Detective Chief Inspector Mark Gray, from Lancashire Constabulary’s Force Major Investigation Team, said: “We believe that Naeem Butt is being harboured by associates within Edinburgh who are themselves committing a criminal offence, and will be liable to arrest and prosecution.”
Police today released CCTV images showing Butt catching a train from Manchester to Edinburgh hours after Mr Ahmed was murdered.
A team of detectives from Lancashire has been working closely with Lothian and Borders Police in Edinburgh since the murder happened two weeks ago, and have now obtained a warrant for his arrest.
Today (Wednesday 7 July) search warrants, obtained by Lancashire police, have been executed at addresses in the city.
DCI Gray added: “I am in Edinburgh today working with my colleagues from Lothian and Borders Police as this murder investigation continues. This was a brutal murder and I would urge Naeem Butt to surrender himself to the police and for anyone who knows of his whereabouts to come forward.”
Chief Inspector Tony Beveridge, from Lothian and Borders Police, said: “Officers from Lothian and Borders Police and Lancashire Constabulary have this morning been involved in raids on addresses in Edinburgh as part of the search for Naeem Butt.
“We have been working closely with our Lancashire colleagues in order to bring this search to a successful conclusion and we have significant resources in place as part of this effort.
“At this time there is nothing to indicate that Naeem Butt presents an immediate risk to the public, however, we would advise anyone who sees him not to approach him, but to contact police immediately.
“Similarly, anyone who has any information regarding his whereabouts is urged to get in touch as a matter of urgency.”
Butt is described as 5′ 10″ tall, of medium to slim build with dark hair and brown eyes. He has a piercing in both ears, as well as a number of distinctive tattoos, including a scorpion and peacock on his left arm and a cobra on his left hand.
Anybody with any information should contact Lancashire Constabulary on 01254 51212 or Lothian and Borders Police on 0131 311 3131 or call Crimestoppers anonymously on 0800 555 111.