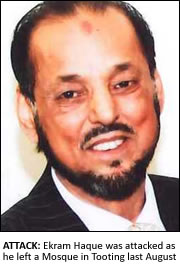 TWO youths who viciously attacked a Tooting grandfather outside a Mosque in an apparent ‘Happy Slapping’ attack, assaulted two other men just minutes earlier, it has emerged today.
Ekram Haque, 67, was punched in the head and died in hospital days later.
Today two teenagers, aged 16, and 15, pleaded guilty to the manslaughter of Mr Haque at the Old Bailey.
Another 15-year-old youth pleaded guilty to the other assaults which caused actual bodily harm. He denied manslaughter. None of the youngsters can be named because of their ages.
The youths, who were part of a gang which called themselves Lane Gang Productions, assaulted a man in his 70’s who they knocked unconscious and a man in his 40’s only minutes before they set upon Mr Haque in Tooting on 31 August last year.
Both men survived the violent attacks but were left with head injuries that needed medical treatment.
The gang targeted vulnerable people in an area where a large number of Asian people lived and police said the assaults had left locals “distressed” and “wondering how they could protect themselves.”
During the evening of August 31 Mr Haque, a retired care worker, left his local Mosque in Tooting when he was viciously set upon by the youths.
His three-year-old granddaughter was forced to watch as the teenagers violently punched Mr Haque head before fleeing.
The punch caused Mr Haque tolose consciousness and fall on the pavement causing irreparable damage.
He was admitted to hospital but continued to deteriorate but died on 7 September. A post-mortem examination gave cause of death as impact to the skull.
Just days after the attack detectives arrested several of the gang members following analysis of CCTV cameras in the area.
They had only recently been arrested after attacking an Asian couple at their home on the 26 August.
Officers seized their mobile phones and found evidence of other incidents where the youths would film themselves hitting innocent people. They would shout out ‘Lane Gang Productions’ and were then seen to run off jeering and laughing at their cowardly escapade.
Detective Chief Inspector John McFarlane from MPS’s Homicide and Serious Crime Command said: “It is tragic and abhorrent that Ekram Haque, who had just left a place of worship, died in this way, injured so horribly in front of his three-year-old granddaughter in such a pointless and violent attack.
“These cowardly youths had carried out an indiscriminate spree of violence that defies belief. Their victims were the elderly, infirm or they were people who were attacked from behind with no warning.
“A number of these motiveless assaults were callously filmed by the teenagers on their mobile phones. These have been inappropriately deemed ‘Happy Slapping’. This is not a term that I recognize – it is violence for the sake of violence and is a criminal act which will always be prosecuted.”